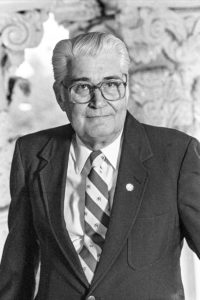 Born in Ortelsburg, East Prussia, on March 4, 1927, he attended public schools in his hometown and the Herman Lietz School on the Frisian Island of Spiekeroog, where, at age 15, he and his fellow students were drafted to auxiliary military service for anti-aircraft duty. He was subsequently called up to regular military service in the German Wehrmacht and was wounded during combat in East Prussia in February 1945.

Tresp taught at various colleges in the Southeast prior to joining the faculty of UGA’s history department in 1957, where he taught for many years primarily in the area of modern German and European history. He helped to establish UGA’s Honors Program and served as its director from 1967 until his retirement from the university in 1994. He also served as acting associate vice president for academic affairs from March 1979 to June 1980.

In addition to his wife, Lucy, Tresp is survived by one daughter, Lucy Anna Tresp Sheftall, and her husband, John McKay Sheftall, of Columbus; three grandchildren, Lucy Banks Sheftall of Los Angeles, California, John McKay Sheftall Jr., of Boston, Massachusetts, and Andrew Tresp Sheftall of Columbus; a sister-in-law, Regina Tresp of Hamburg, Germany; and a host of relatives, friends and former students.

Graveside services were held Jan. 26 at Oconee Hill Cemetery. In lieu of flowers, the family suggests contributions to the UGA Honors Program or a charity of one’s choice.