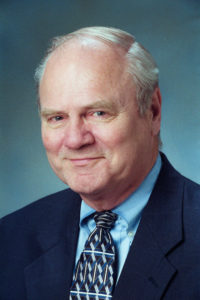 Born in Cleveland, Ohio, on Nov. 27, 1930, Prokasy began his varied career at age 12 with quite a few jobs, some of which were paperboy, cemetery maintenance worker, school system custodian, vegetable/fruit roadside marketer, setter of wooden pins in a bowling alley, neighborhood ice cream truck driver and his favorite, milkman. His academic career began in 1948 when he graduated in North Olmsted, Ohio, with almost every academic and sports honor bestowed.

Active after his retirement from UGA, Prokasy served on both the regional and local public library boards, the Classic Center Foundation Board, the boards of the Georgia Museum of Art and the State Botanical Garden of Georgia. He was a member of the Athens Torch Club and more. Prokasy also belonged to two book groups, and he and his wife, Pam, attended as many cultural and sports events as their calendar would allow. They also endowed the Prokasy Professorship of the Arts at UGA.

Prokasy was preceded in death by his parents, William and Margaret Prokasy, his brother Jim Prokasy and his sisters Marge Salway and Laura Isaacs.

In addition to his wife, Prokasy is survived by daughters Cheryl Schumer (Larry) of Salt Lake City and Kathi Geisler of the Boston area; granddaughters Sarah Glass and Julia Villianeau; great grandchildren Zev, Moriah and Tzelia Glass and Cameron and Jada Villianeau, all of the Boston area; stepson Kevin Wier of Charleston, South Carolina; and stepdaughter Lisa Cauthen, her husband, Joshua, and their daughters Natalie and Lindsey Cauthen of Athens.

A memorial service will be held at a later date. Memorial contributions may be given to the Athens-Clarke County Public Library.