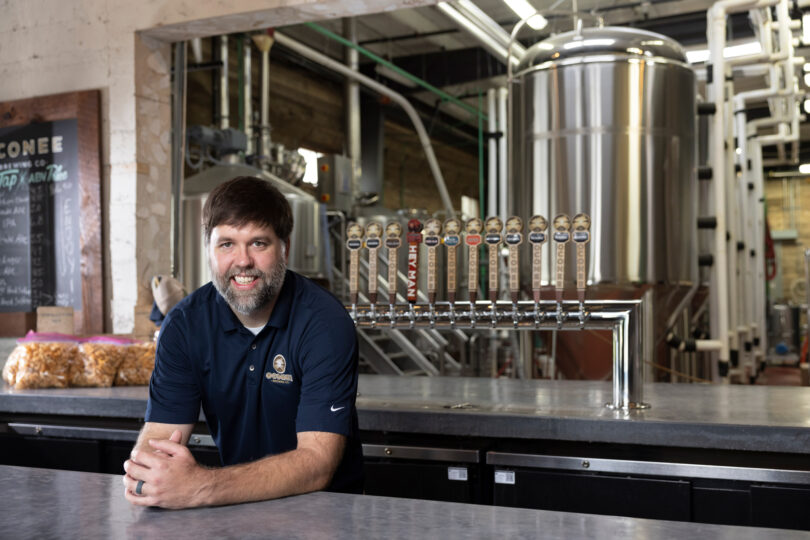 Taylor Lamm walked away from a banking career to open up Oconee Brewing in Greensboro. (Photo by Peter Frey/UGA)

Five years in banking was enough for Taylor Lamm.

I wasn’t super-excited about my career path,” he says. “But I really became passionate about this hobby of brewing beer and thought, ‘Why don’t I make that a career?’”

Lamm quit his job and entered brewery school, which took him from Chicago to Munich, where he learned the science and business of brewing beer. Upon his return to the States, he applied for every job he could find and landed an assistant brewer position in Durham, North Carolina.

A few years later, a mutual friend passed Lamm’s name over to John McGarity BBA ’68, a real estate developer from McDonough who owned a historic building in Greensboro and wanted to turn the place into a brewery.

Lamm, who was working as a brewer in Greenville, South Carolina, at the time knew the town. He had been a banker in Greensboro for two-and-a-half years and says that returning was a no-brainer.

Shortly after meeting in person, Lamm, McGarity, and McGarity’s son, Nathan, became partners in what would become Oconee Brewing. It opened in 2017 in that historic building, which had once been a cotton warehouse and then a Choco-Cola plant.

Attached to the tap room is a 3,600-square-foot event space with outdoor patio space beyond that. “We originally didn’t know what to do with that extra space, but we quickly realized we could utilize it for a variety of things,” Lamm says.

Indeed. Oconee hosts rehearsal dinners, weddings, concerts, and even corporate retreats. While just over 3,000 people live in Greensboro, the town is just 45 minutes south of Athens and an hour, 15 minutes from both Atlanta and Augusta—the perfect distance for an easy getaway. The Lake Oconee resort area is just 10 minutes away, too, and that adds a large and loyal clientele.

“Working for different breweries, you get to know your market,” Lamm says. “You also look at the rest of the state and see some of the styles they are doing. You want to set yourself apart.”

The way Oconee sets itself apart is in a mix of styles Lamm learned how to brew in Germany (like dunkelweizen, a dark wheat not commonly found in Georgia), and light, easy-drinking styles for the laid-back vacationers and local fans. Oconee’s spiciest offering is a habanero ale.

Distribution has been key. Oconee products are beginning to enter larger markets, and, most importantly, they are very popular locally.

“Lake Oconee is in our backyard,” Lamm says. “Pretty much every restaurant wanted some local beer on draft. That’s when we thought, this might really work. And so far, it has.”