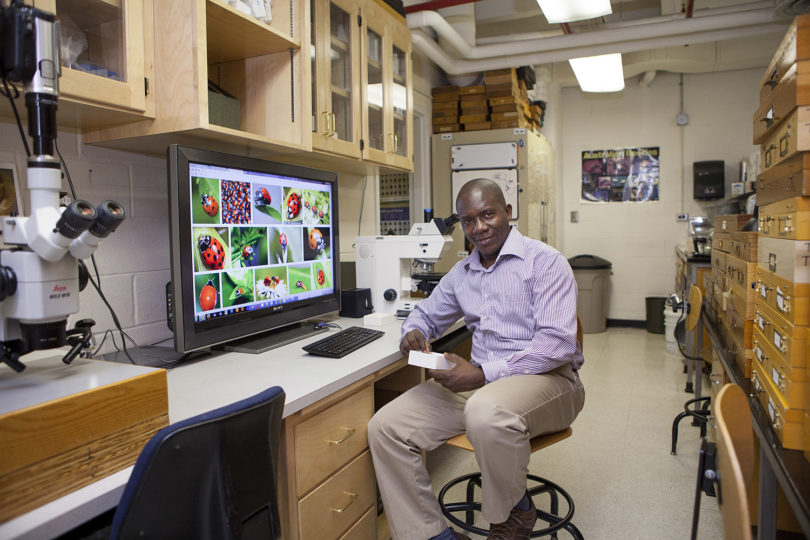 In past years, only one Global Programs Graduate International Travel Award has been given annually by the Office of Global Programs in the College of Agricultural and Environmental Sciences. The awards help cover the cost for graduate students traveling abroad to conduct research or attend professional meetings in their fields of study.

This year was different.

“We had such a large number of excellent proposals that we couldn’t narrow our decision to just one award,” said Vicki McMaken, associate director of Global Programs. “Fortunately, we were able to allocate funds for an additional award from our office and a third was funded by the CAES Office of Academic Affairs.”

The awards allowed the winners to experience opportunities that both enhanced their doctoral research and moved them closer to their career goals.

Plant pathology doctoral student Stephanie Bolton had nearly given up on finding an international conference focused on mycotoxins, toxins produced by fungi. It turns out, she should have been more specific in her Web queries.

“I tried one more time, using the more specific search term ‘Fusarium,’ ” she said. “To my great surprise, I found absolutely the most perfect conference possible, the European Fusarium Seminar in Puglia, Italy.”

Bolton’s research focuses on the large number of fusarium fungi that can produce harmful mycotoxins in grapes in the southeastern U.S.

“I’ve presented at other conferences, but it has always felt like my research topic didn’t quite fit in since it is of an interdisciplinary nature,” Bolton said. “At EFS, I was talking about wine, fusarium fungi and mycotoxins constantly—sometimes until 2 a.m.—with all of the rock stars in the field. And, best of all, they were very interested in the work we are doing at UGA.

“It was amazing to have long, academic, interesting conversations with leading researchers whose names I have seen dozens of times in print,” she also said. “This meeting fostered future collaborations and made me view the scientific community in a totally different light.”

Yi Gong, a doctoral student in plant pathology, presented his research in China at the Annual Conference and Exhibition on Functional Foods, Nutraceuticals, Natural Health Products and Dietary Supplements.

Gong’s research focuses on the nutritional and health-promoting components of U.S. pecans, including evaluating the antioxidant capacities found in pecans and using liquid chromatography and mass spectrometry to compare phytochemicals found in the tree nuts. During his presentation, Gong discussed his research, which compares selected nutrients and bioactives found in pecans and Chinese hickory nuts.

“The target of this research is to provide consumers with detailed nutritional and healthful bioactive facts about pecans, to promote an increase in per capita consumption through targeted marketing efforts by the industry and to secure the long-term competitiveness of U.S.-grown pecans,” Gong said.

Brad K. Hounkpati, who is earning his doctorate in entomology, visited and worked in five countries on two continents over the course of 30 days as part of his research on West African Coccinellidae, commonly known as ladybugs or ladybird beetles, and their potential for bio-control programs in Africa.

During that time, Hounkpati collected 128 of the insects in Benin, Ghana and Togo. In Belgium, Germany and Senegal, Hounkpati photographed ladybug specimens, which will allow him to make definitive identifications of the insects he and others have collected. While in Senegal, he was given a curated collection to bring back to Georgia and use as a part of his identification efforts.

“My knowledge about the taxonomy and biology of WAC has increased dramatically as a result of my research in the field and in natural history museums,” Hounkpati said. “I also established a strong network of collaborators in West Africa.”

Hounkpati’s research is part of a collaborative program that includes scientists in seven West African countries with the goal of producing major taxonomic works on ladybird beetles. Additionally, the researchers hope that by broadening the knowledge of ladybugs in West Africa, the insects might be used as pest control agents and could contribute to food security.