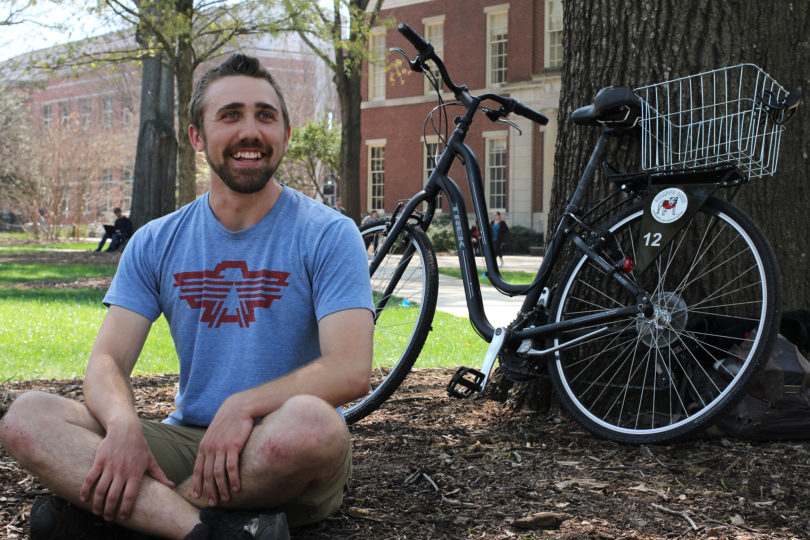 The bike seat is being stubborn, so Sahana Srivatsan pops her hand harder on the saddle until it budges. The Bulldog Bike she is borrowing is technically a little too big for her, but with an easily adjustable seat, it can fit almost anyone.
She planned it that way.

Srivatsan, a fourth-year international affairs major and arts minor, was a major force behind the revamped Bulldog Bikes program. As an intern with the Office of Sustainability, she transitioned the program from clunky but solidly made red bikes housed at hard-to-reach places across campus to black Trek hybrids complete with gears and handlebar brakes that students, faculty and staff can check out at the main library and science library.

She didn’t need a bike when she restarted the program. In fact, before hopping on a Bulldog Bike for a video interview, she whizzed up to the bike rack bordering UGA’s main library on a blue and white Trek road bicycle she’s borrowed semi-permanently from her roommate. Her mountain bike is a little too heavy for regular commuting to and from campus.

What she did need was company.

“I wanted my friends to ride bikes with me,” she said. “It’s really encouraging to see people riding more and enjoying the program the way it should be enjoyed.”

Bulldog Bikes, run through the UGA Office of Sustainability in collaboration with UGA Libraries, currently has 10 bikes in its fleet of two-wheeled vehicles and about 10 more ready to deploy at a third on-campus location.

“The main thing about Bulldog Bikes is that it makes it accessible to ride a bike on campus,” said Corey Klawunder, a fourth-year environmental engineering major and the Office of Sustainability’s Complete Streets intern. “It shows people that they have transportation options. They don’t have to choose a car to get to wherever they are going. And not only does that contribute to your traditional sustainability, it also gets people outside and exercising.”

Bulldog Bikes allows UGA students and employees to check out and return bikes at no cost to the individual, as long as the bikes are returned to one of the two locations before closing time and without any major damages.

When there are damages—either major or minor—Jon Skaggs steps in to take a look. As the resident student bike mechanic and a fourth-year ecology major, he does most of the program’s minor repairs in the field.

Today, he’s unwrapping his red tool bag to correct a minor brake issue, always a concern when the hills of Athens are involved.

“It’s exciting to see students riding the bikes that I’ve been working on,” Skaggs said. “I’ve ridden bikes all my life, and it’s cool to see people discovering them for the first time. It’s cool to be part of a program that gives back and gives students access to that joy and that fun and that utility that I find in bikes.”

Bigger repairs are hauled back to a make-shift UGA bike workshop, tucked in a corner of the massive warehouse known as Chicopee. The complex contains the various departments of the Facilities Management Division along with several other UGA offices.

In the building that time almost forgot–parts of Chicopee were constructed in 1862 and updated randomly throughout the years—Jason Perry cleans a freewheel before installing it on its new rear-wheel home.

Perry has been a program coordinator in the Office of Sustainability since 2014 and has managed the BikeAthens Bike Recycling Program since 2008. It was in this capacity-and as a research engineer in the UGA College of Engineering-that he met Srivatsan in 2013. They were at a bike conference, and she needed an advisor for the grant she was about to apply for.

“The whole of my sophomore year, we just worked on getting these new bikes with $5,000 in grant money and also creating an easier checkout system,” she said. “And that didn’t actually come until the next year when the program piloted. We came up with this idea that we would use library barcodes—it’s like checking out a book, but checking out a bike.

“Here we are, three years later,” she said. “This is finally in full bloom.”

With students like Srivatsan creating the sparks to get Bulldog Bikes off the ground, Perry keeps the program going by directing the program’s day-to-day operations.

“My role is to manage the program,” Perry said. “It’s actually really easy at this point. Jon does all of the field maintenance and also brings bikes into this shop and does some of the deeper maintenance. Over semester breaks, I’ll bring the bikes in and do some really serious maintenance like changing cables out and truing wheels and things like that.

“So every single bike, at least twice a year, gets some really serious work done on it to make sure it’s going to continue to roll for a few years,” he also said. “They get a lot of use and sometimes they need some extensive work to keep them in shape.”
Bulldog Bikes is a bike-share program that was initially student-driven, according to Perry.

“There’s always been a lot of student projects around the idea of bike sharing—from engineering to art students—and the university listened to them,” he said.

The program was started with a campus sustainability grant in 2011. Sheena Zhang was a senior at UGA when she proposed the project. The red utility bikes originally purchased for the program were too heavy for pedaling uphill, and now staff members who work in the Facilities Management Division use them to get around the flat, 175-yard warehouse more quickly.

In the upcoming years, Perry is optimistic the Bulldog Bikes program will continue to grow.

“Bulldog Bikes currently is a university-based program and is fairly small, but we would ideally like to expand into Athens-Clarke County through a town-and-gown partnership to develop a bike sharing system similar to those in other cities,” Perry said, “a robust network that expands far beyond what we’re doing right now.”

Read more about the university’s sustainability efforts at www.discover.uga.edu.