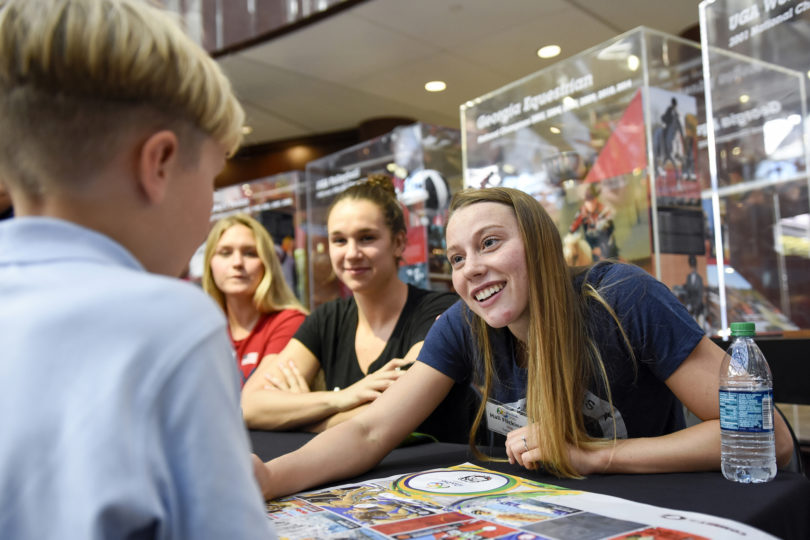 UGA welcomed home its Olympic student-athletes with a reception Aug. 31 at the Butts-Mehre Heritage Hall. Admiring Georgia Bulldog and Team USA fans, including many families, got a chance to meet Olympic athletes who had a strong showing in Rio de Janeiro last month.

UGA President Jere W. Morehead told the 20 student-athletes and coaches in attendance that they made the university proud.

The faces of children like 10-year-old Madison Taylor, of Monroe, beamed as they exchanged words with the athletes they saw compete on primetime TV.

“Just to see their faces was amazing,” Madison said. “They’re so famous and such good role models.”

The cherry on top for the fans was a chance to pick up and take photos with the gold, silver and bronze medals that some of the athletes brought with them.

UGA coaches who trained these Olympic athletes also spoke at the event. Gymnastics head coach Danna Durante, who trained recent UGA graduate and Canadian gymnast Brittany Rogers, thanked the university community for the support it showed to their student-athletes. UGA’s track and field head coach Petros Kyprianou, who was assistant coach for the Estonian national team in Rio, praised the diversity of international student-athletes who come to UGA—which helped give the Bulldogs such a strong showing in Rio. And Jack Baurle, head UGA swimming coach and an assistant coach for Team USA, congratulated the athletes for their performance on the world’s biggest sports stage.

Even after this event, the Bulldogs aren’t done in Rio. Four UGA alumni—Wanda Dennis, goalball; Lindsay Grogan, swimming; Michelle Gerlosky Schiffler, sitting volleyball; and Jarryd Wallace, track and field—are scheduled to compete in the 2016 Paralympic Games in Rio, which begin Sept. 7. Nine students from UGA’s Grady College also will be in Rio to cover the Paralympics for the Associated Press.