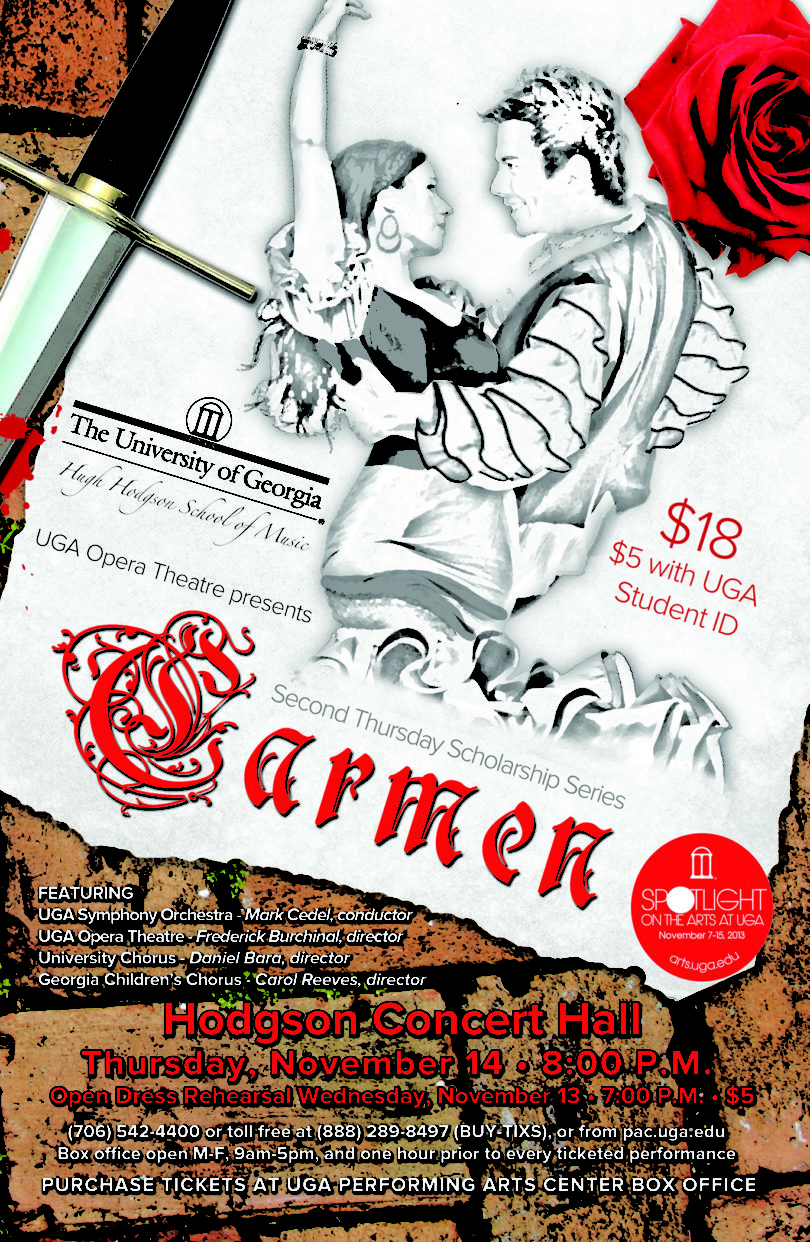 Athens, Ga. – The University of Georgia Opera Theatre will present “Carmen,” Georges Bizet’s fiery tale of love, jealousy and murder, on Nov. 14 at 8 p.m. in the Hodgson Concert Hall.

“I would consider ‘Carmen’ to be one of the top five most well-known operas,” said Opera Theatre Director Frederick Burchinal, the Wyatt and Margaret Anderson Professor in the Arts at UGA. “It seemed to be a good fit for Spotlight on the Arts at UGA, which seeks to bring the arts to a broader audience. Practically everyone knows several melodies from Carmen, whether they realize it or not.”

In addition to the contributions of Burchinal and Cedel, the opera also will feature choreography from Lisa Fusillo, head of the dance department; scenic art from former Metropolitan Opera veteran Jill Biskin; and costumes, set pieces and supertitles from Carroll Freeman, Georgia State University opera department director. Opera coach Kathryn Wright and director of choral activities Daniel Bara, both of UGA, as well as Georgia Children’s Chorus director Carol Reeves assisted in preparation for the production.

“Every opera is an enormous production requiring cooperation and a shared vision, and ‘Carmen’ is no exception,” Burchinal said. “The Opera Theatre at UGA provides exceptional opportunities for our singers to learn complete roles before they leave to further their careers.”

Set in Seville, Spain, “Carmen” features UGA students Marisa Ann Colon-Corsino in the title role, Joseph Michael Brent as her lover Don José, Christopher Voss as Escamillo and Elisabeth Slaten as Micaëla. The story follows Don José, a young corporal of dragoons who finds himself bewitched by the tempestuous Carmen, causing him to turn his back upon both his sense of duty and his beloved Micaëla. When the rakish toreador Escamillo enters the picture, their relationship quickly becomes more complicated.

“Bizet was able to combine all theatrical elements into this work,” Burchinal said. “It’s a fantastic fusion of tragedy, drama and quite a bit of comedy, which can turn at a moment’s notice. It captures all of the fire, passion and rich heritage inherent in Spanish culture.”

Tickets for the program are $18 for the general public and $5 for students and are available at the UGA Performing Arts Center box office, by calling 706-542-4400 or online at www.uga.edu/pac.

In addition to the full performance, the Opera Theatre will offer $5 admission to a behind-the-scenes open dress rehearsal Nov. 13 at 7 p.m.

The Spotlight on the Arts festival is presented by the UGA Arts Council, of which the Hugh Hodgson School of Music is a participating unit. More than 60 events are scheduled during the nine-day festival in November. For more information, see arts.uga.edu.

Established in 1980, the Second Thursday Scholarship Series offers showcase performances by UGA students and faculty the second Thursday of each month throughout the academic year. Proceeds from individual ticket sales and season subscriptions help fund year-long academic scholarships and assistantships for students and present donors the opportunity to sponsor individual students of the music school at several levels of giving.

The next concert in the series will be the UGA Holiday Concert in the Classic Center Theatre on Dec. 3 at 8 p.m. For more information on the Second Thursday Series or the Hodgson School of Music, see music.uga.edu.