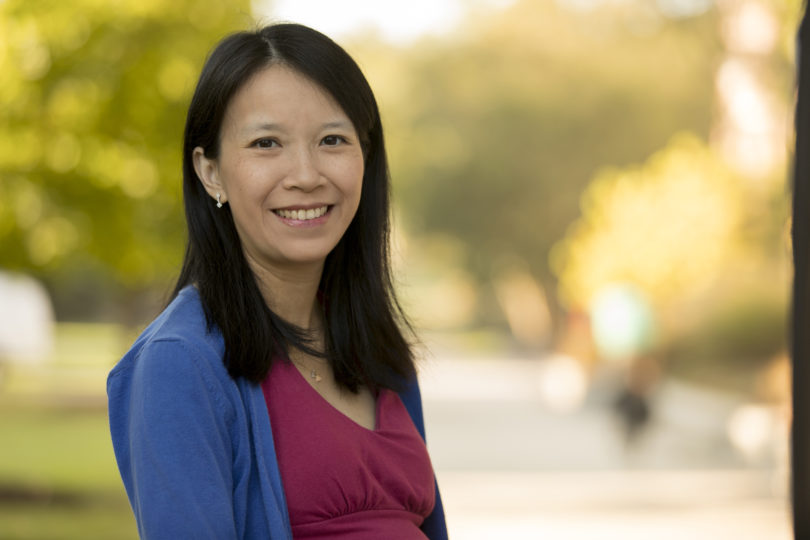 You can’t see it. You can’t feel it. But you use it every day—on your phone, your laptop, your tablet.

It’s the radio frequency spectrum, and it’s what makes communicating without being in the same room possible. There’s a problem, though: The spectrum is running out of available frequencies, and we can’t create more.

UGA associate professor of engineering Mable Fok wants to be sure we’re making the most out of what we have, so she’s using light to identify and harness unused holes in the spectrum.

Fok is the recipient of several National Science Foundation awards. Her area of expertise is photonics, the science of using light to perform similar functions as electronics but with much better performance. In Fok’s case, that means using light in place of traditional electronics to enable a variety of communications. Her most recent NSF grant is for her work to create hardware that could use light to analyze the radio frequency spectrum, seek out spaces on the spectrum that aren’t being used and direct devices to those holes in the spectrum.

“Fundamentally, this spectrum is all we have,” she said. “With optics, with light, we have lots of possibilities. We can identify available frequencies on the spectrum in a very fast and dynamic manner. That’s very important because those opportunities can come and go in one-thousandth of a second or even faster.”

Space on the spectrum is eaten up by virtually all consumer electronics, but it’s also used by medical devices that need to communicate information in hospitals and for national security and military communication purposes. Using the spectrum more efficiently would mean being able to support more devices on the spectrum. “In the battlefield, let’s say, soldiers will be able to gather more useful information wirelessly to keep them safe and be able to talk to each other freely,” Fok explained. “They won’t be competing with each other or anyone else for signal space.”

The ultimate goal is to integrate the technology onto a chip that can be inserted into the communication device, where it would determine the frequency it should be using and switch the device to that level.

Using light to improve communication technologies is just one of Fok’s many photonics projects, and she believes the applications for light are essentially limitless.

“I think my research will bring a better future, in terms of technology, in terms of health and national safety,” Fok said.

Editor’s note: This story is part of the Great Commitments series, which focuses on cutting-edge research happening on UGA campuses. Read more about UGA’s commitment to research that changes lives at greatcommitments.uga.edu.