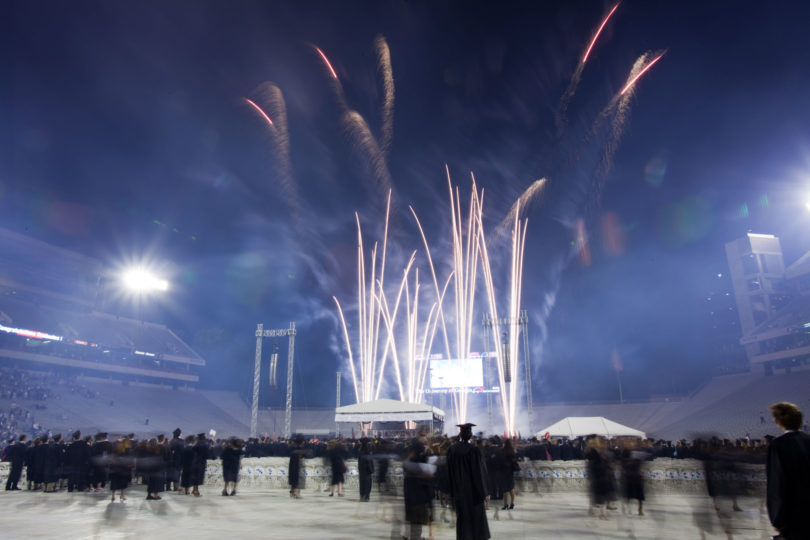 Alton Brown, the award-winning Food Network chef, told graduates that “life is short and it goes by really fast. You can not afford to live at least a little bit of it every single day” at the May 8 Commencement ceremony.

“Live with ferocity, with vivacity, without apology and above all without regret-because regret is absolutely worthless,” he said.

A UGA alumnus, Brown was the featured speaker at 6:30 p.m. event at Sanford Stadium. An estimated 4,000 undergraduates were eligible to receive bachelor’s degrees.

The sunset festivities featured a new tradition this year-a fireworks show after the speakers while the recessional and other UGA music played.

The event also had the first live music in many years as provided by the UGA Wind Ensemble. The band played traditional graduation music and during the fireworks played game day favorites.

In a speech laden with jokes and advice, Brown, who writes, produces, directs and stars in Good Eats, told the graduates “You don’t know nothin’ yet. Those of you that get some wisdom, will realize ‘I’m not really as smart as I thought I was.’ ”

He also spoke on the benefits of failure.

“If I’ve enjoyed any success at all, it is because somewhere along the line I decided to fail,” said the Peabody and James Beard Award winner. “Failure will teach you things. Do not live your lives to avoid failure, but to be able to fail. And when you do it, fail spectacularly. Failure is good. Failure works. Just don’t make a habit of it.”

He also quipped “it is very difficult to find your car keys with a telescope. People focus so intently on the success they think they ought to have that they miss their calling in life because they didn’t have the right perspective. Examine every opportunity.”

He remarked “the road to success has been paved over and turned into a parking lot. The road’s gone and most of the destinations aren’t there anymore. You’re gonna have to blaze the trail yourself.”

Brown’s other advice included:
• Jobs don’t fulfill people. People fulfill jobs. There is no job that’s a waste of time unless you choose to waste your time.
• Beware of stuff. Debt sounds like death because it is.
• Skip rehab and go to church.
• Marry wisely and marry forever. It’s the most important decision you will make in your life and the most important investment you will make in your life.
• Be yourself, first and foremost. It is more important to figure out who you are and be it and be a first-rate version of yourself than a second-rate version of someone else or the person other people want you to be.

UGA President Michael F. Adams told the graduates “in the past two years alone you have learned about a 100-year drought, a 500-year flood and the worst recession since the Great Depression. Each of these events has impacted your life here…It’s been said that hard times don’t build character, they reveal it. And we believe that the character that has been revealed implicit in the Class of 2010 is a very strong one.”

Sarah Christian Haynes of Roswell was the student speaker for the undergraduate ceremony. She received bachelor of arts degrees in political science, international affairs and history.

“There’s a saying in Georgia that if you lead a good life and say your prayers, when you die you’ll go to Athens,” she said. “Think back to when you first arrived in Athens. Did you have any idea that this town…would become your version of heaven?”

The graduate ceremony was held at 10 a.m. in Stegeman Coliseum. Thomas Lauth, dean of the university’s School of Public and International Affairs, was the speaker.

About 1,170 candidates for master’s, doctoral and specialist in education degrees were eligible to participate in the ceremony.