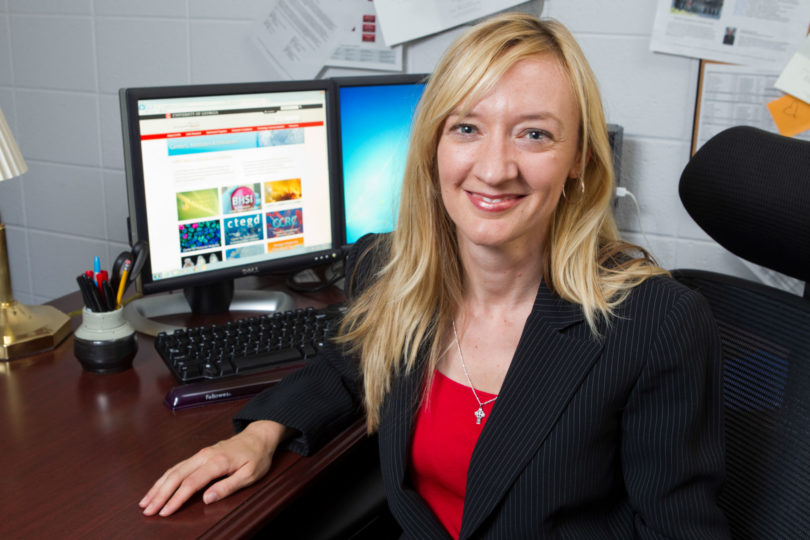 Kim Gentry lives her life around the motto that everyone has something special to offer. That motto is evident in her work as director of development for the Office of the Vice President for Research as well as in her “creative side” as an award-winning songwriter and member of the acoustic duo Berteal.

“There’s some type of thing stirring in everybody, and I think if we could just harness that and try to do something, I think that’s a game changer,” Gentry said. “I’m just this ordinary, average person who works every day, but I’m trying to do something out of the ordinary. I feel like if I could do that, other people could do that too.”

Gentry and her brother, Chad, formed Berteal in 2010 when they both were living in Alabama. At the time, Gentry was active in raising awareness for animal welfare when her brother suggested using music to get her message out since they both had taken various musical lessons since childhood.

“Because Berteal came out of that desire to have a mechanism to communicate about things I care about, our songs are very topical,” Gentry said. “We have songs about animal advocacy, and we have a song we’re really excited to record about self-esteem.”

The duo’s song “How I Want to Be” has placed in three songwriting contests, including grabbing second place in the Woody Guthrie Folk Festival Songwriting Contest.

“That placement was a particular honor for me because that contest is geared toward songs with a message like a Guthrie song,” Gentry said. “It was cool to me that that song would connect with the judges in the way we were meaning for it to.”

Outside of being an independent artist, Gentry works hard to point out the special things UGA students and researchers are doing in the Office of the Vice President for Research.

“Our faculty are doing such good and amazing things that we just want to encourage the support of them,” Gentry said. “The thought was that having someone from a fundraising perspective focused on this area would be helpful to resource development and allow us to do even more amazing things.”

Gentry’s duties include reaching out to individuals, foundations or companies to share the work being done in OVPR. Networking and talking with friends of the university are major aspects of her position. She also works on writing and submitting grant proposals to try to bolster resources.

“My focus is always on two things: how can we get the word out more about the awesome things we’re doing and how do we do more awesome things,” she said. “I like to think of it as inviting people to be a part of something exciting.”

Since OVPR is not a college or school, there is not an alumni base to rely on for resources or help, Gentry said. She often works with other development officers across campus to find connections to those who might be interested in some sort of partnership.

“We’re looking more for dollars for research and those bigger picture problems,” Gentry said. “It’s all about just helping elevate the research enterprise here. We’re doing so many awesome things.”

Gentry, who has years of experience in both private and public development, said that her creative work with Berteal and her passion for delivering positive messages has carried over into her fundraising and resource building.

“I do think my desire to make a difference helps work on how can we increase resources and communicate about our current research,” Gentry said. “I think it all ties in together.

“I’m very passionate about trying to help people step out of their comfort zone and try to make a difference in the world,” she said.