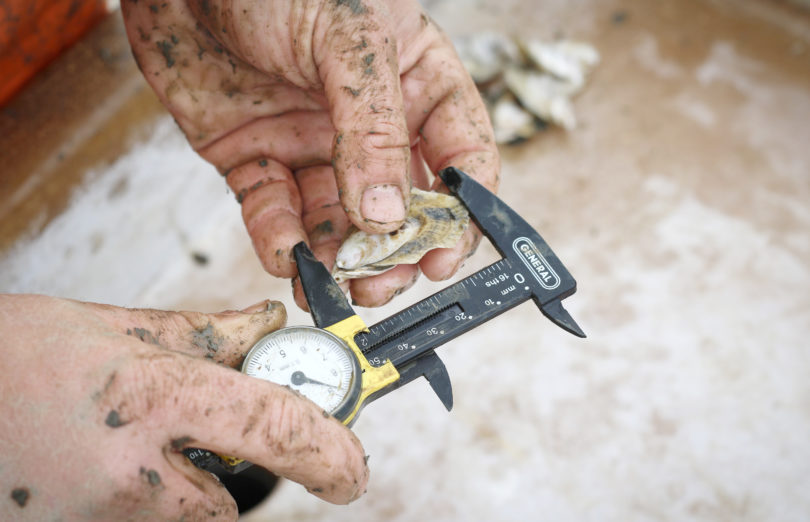 The University of Georgia is studying oyster farming, and measuring the growth of more than 10,000 oysters in Wassaw Sound. Photo credit: UGA Marine Extension and Georgia Sea Grant.

Ripples form on the surface of the water as University of Georgia graduate student Shannon Kirk loads her research equipment onto the research vessel Marie. Today she’s heading out to her research site in Wassaw Sound to measure the growth of more than 10,000 oysters.

“We’ll measure the length, width and height to determine the overall proportion of the oysters, which will help us understand how valuable they might be in the eyes of consumers,” said Kirk, who is studying aquaculture in the Master of Science program at the Warnell School of Forestry and Natural Resources.

In partnership with UGA Marine Extension and Georgia Sea Grant, Kirk is studying ways to reduce the buildup of barnacles, algae and other organisms, called biofouling, on floating cages used by shellfish growers. Her findings could help UGA’s efforts to revive the oyster industry in Georgia. 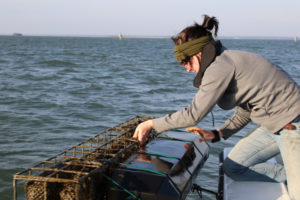 UGA graduate student Shannon Kirk is studying ways to reduce the buildup of barnacles, algae and other organisms, called biofouling, on floating cages used by shellfish growers. Her findings could help UGA’s efforts to revive the oyster industry in Georgia. She is studying aquaculture in the Master of Science program at the Warnell School of Forestry and Natural Resources.

“When biofouling gets really, really bad it can actually reduce water flow to the oysters,” Kirk said. “Oysters depend on that water flow to feed on phytoplankton and algae in the water. If other organisms are blocking it, they start dying off or they don’t grow as fast.”

This is a problem for growers raising single oysters, a product that’s in demand by the restaurant industry. Biofouling can slow production and decrease the value of an oyster because it doesn’t look aesthetically pleasing.

“Fouling is hindering a lot of advancement in oyster aquaculture because of the amount of time you have to spend tending to the oysters in order to control it,” Kirk said.

Kirk is testing ways to reduce biofouling by spraying floating cages with a coating designed to deter organisms. A second method involves flipping the cages upside down for 24 hours on a weekly, biweekly and three-week basis to interrupt the growth of newly settled organisms.

Shellfish growers typically flip their cages once a week, which dries out the marine life growing on the cages.

“If we figure out that the aerial drying doesn’t need to occur quite as frequently, then those oysters are going to have more time to feed and the farmers won’t need to go out there to tend to them quite as often, which will save them money on gas and labor,” Kirk said.

“These are already allowed in South Carolina and North Carolina,” Bliss said. “If we can show that this method is successful in our state, hopefully it will pave the way for new permitting and regulations that make farming oysters easier and attract new farmers.”

With buy-in from universities and Sea Grant programs, collaborators can tackle the problem by using a two-pronged approach through research and extension.

Julie Davis, living marine resources extension specialist with the S.C. Sea Grant Consortium, is the lead on the project. The regional team hopes to fine-tune growing techniques and further demonstrate the viability of the floating cage oyster production system that’s already in use by farmers throughout the region, she said.

“We have a fairly new industry in the South,” Davis said. “We want to share results of the project with people here who are interested in the business so they’re not just seeing content from other regions, like the West Coast or Northeast.”

“As an extension agent, I can say to farmers, ‘We tried this method in this location and you’re only an hour up the road,’” Davis said. “The information is more relevant to the grower and it allows them to make their business decisions with more confidence because the data has been generated locally.”

The team is working closely with oyster farmers over the course of the project. The growing gear is deployed on their farms and they are working with extension agents to handle routine flipping at the sites. At the conclusion of the study, the research team will share results at workshops designed for current growers as well those who have an interest in getting into oyster aquaculture in each state.