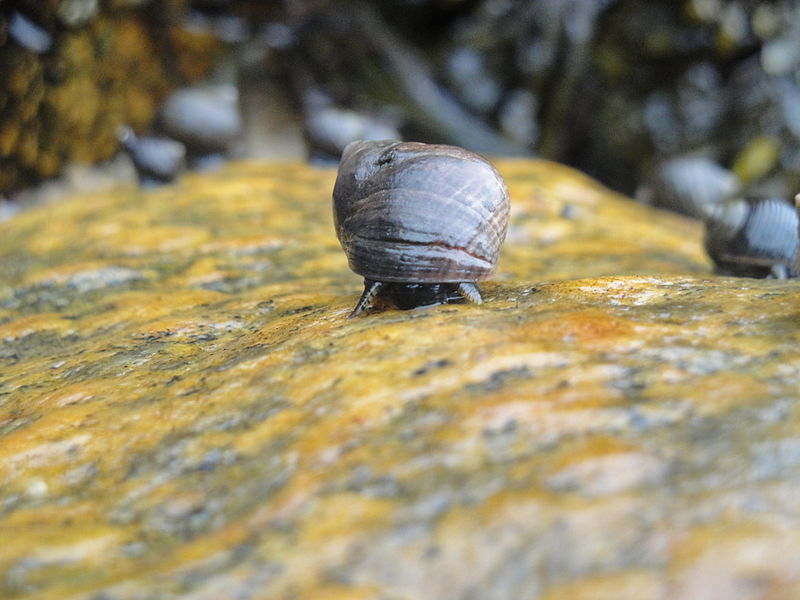 Littorina littorea, the snail used in the case study.

Ignoring the role of parasites may lead to a misinterpretation of organism responses to environmental change, according to an Innovative Viewpoints article by ecologists from the University of Georgia. Their paper, “To improve ecological understanding, collect infection data,” presents case studies in which host-parasite relationship and infection data affected the interpretation of ecological outcomes. Published in Ecosphere, it is available online at http://onlinelibrary.wiley.com/doi/10.1002/ecs2.2770/full.

“We live in an era of rapid ecological change, and it is critical that we understand the influence of parasites in ecological systems,” said lead author Alyssa Gehman, a postdoctoral fellow at the University of British Columbia and the Hakai Institute who received her doctorate in ecology from UGA in 2016.

Parasites can affect ecological processes from the individual to the ecosystem level, influencing host behavior, population dynamics and interactions among species. They can also interact with other stressors, such as higher temperatures or species invasions, in unexpected ways. If they are not taken into account when studying how ecosystems respond to changing conditions, study conclusions may be wrong.

In one of the case studies included in the paper, marine snails appeared to respond to warmer water temperatures by increasing their feeding rate. When the snails’ parasite infection status was taken into account, however, it turned out that only the infected snails were feeding at a higher rate; uninfected snails continued at the same rate as they had when the water was cooler. Predictions about how a population of snails would respond to rising temperatures, then, would depend on knowing the proportion of infected versus uninfected individuals.

According to the authors, examples like these illustrate the importance of having baseline parasite data. Recognizing that collecting such information may not always be feasible, they offer suggestions for improving its acquisition, analysis and interpretation by focusing on collaborative approaches.

“Success for this research would be if we can convince more ecologists to either directly include parasites in their hypothesis/collections/research, or to reach out to collaborate with disease ecologists and parasitologists who work in similar systems to develop new collaborations,” said Gehman.

The authors of the study are alumnae of the Odum School of Ecology at the University of Georgia who call themselves the “Parasite Ladies” because of their shared love for the topic of parasites and disease ecology.

“We spent our early graduate years discussing each other’s dissertation research, conducted on a range of host species including African buffalo, monarch butterflies, crabs and snails,” said Gehman. “In our last few years we began to discuss not just our dissertations, but the field of ecology as a whole, and what big questions we, as a group, were in a unique position to be able to discuss.”

Although now spread across the continent, the “Parasite Ladies” continue to keep in contact with one another. They aim to meet once or twice a year in addition to keeping in touch via group Skype meetings, texts and emails.

“Over the years we have morphed into a co-mentoring group, and through our discussions as a group have been able to help each other hone our career goals to suit our interests and life desires. And of course, we are lifelong friends,” Gehman said.