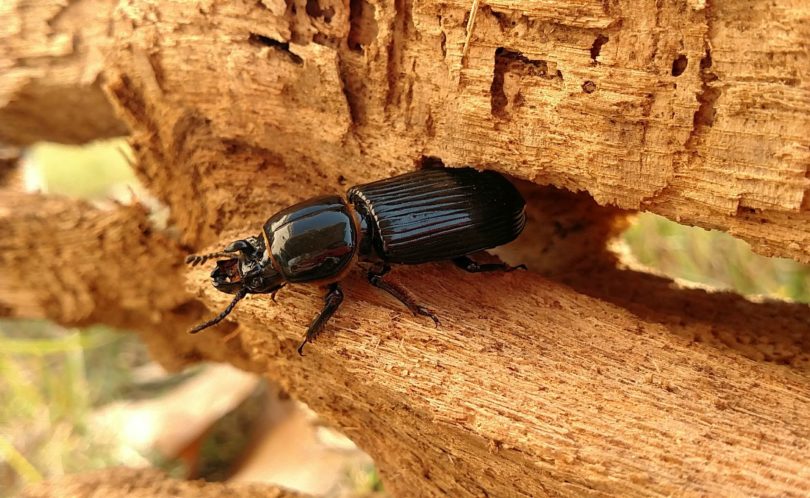 Close-up of a horned passalus beetle.

A common woodland beetle that plays an important role in the decomposition of fallen trees may be getting a boost from a surprising source: parasites.

New research from the University of Georgia found that horned passalus beetles infected with a nematode parasite are able to process wood 15% faster than uninfected beetles. The study, by Andy K. Davis, a research scientist in the Odum School of Ecology, and undergraduate ecology student Cody Prouty, was just published in Biology Letters. It contributes to a growing understanding that parasites play important—and not always negative—roles in ecosystems.

“What this means is that parasitized beetles are more effective at breaking down logs, so that they provide a more effective ecosystem service,” said Davis. “In other words, this parasite could be considered beneficial to the forest ecosystem.”

Horned passalus beetles, also known as bess beetles, are common in eastern U.S. forests. They live in decaying logs, which they help break down by eating and making tunnels, speeding up decomposition and the return of the logs’ nutrients to the soil. 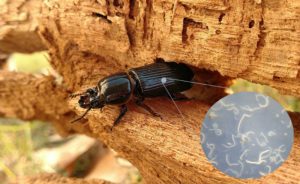 A nematode parasite, Chondronema passali (inset) inhabits the abdomen of this beetle species and can number in the thousands in a single beetle.

Davis had previously found that many of these beetles are infected with a naturally occurring nematode parasite. He and Prouty noticed that infected beetles appeared to suffer no ill effects from their parasites; in fact, previous studies showed that some infected beetles were larger than uninfected ones. The researchers suspected that the infected beetles might be eating more to compensate for the nutrients they were losing to the parasites, and they devised a laboratory experiment to find out.

They started by collecting 113 horned passalus beetles from a wooded area near the UGA campus. They placed each beetle in an individual container with a piece of intact wood from the same log where it was found. After three months, the researchers examined what was left of the wood, measuring how much had been broken down into fine material. This allowed them to calculate how much wood each beetle processed per day.

Next they examined the beetles, determining weight, sex and whether parasites were present.

“It is interesting to think that although the beetle and nematode have a parasitic relationship, the ecosystem benefits from not only the beetle performing its function, but the parasite increasing the efficiency of the beetle,” said Prouty. “Over the course of a few years the parasitized beetles could process many more logs than unparasitized beetles, and lead to an increase of organic matter in soils.”