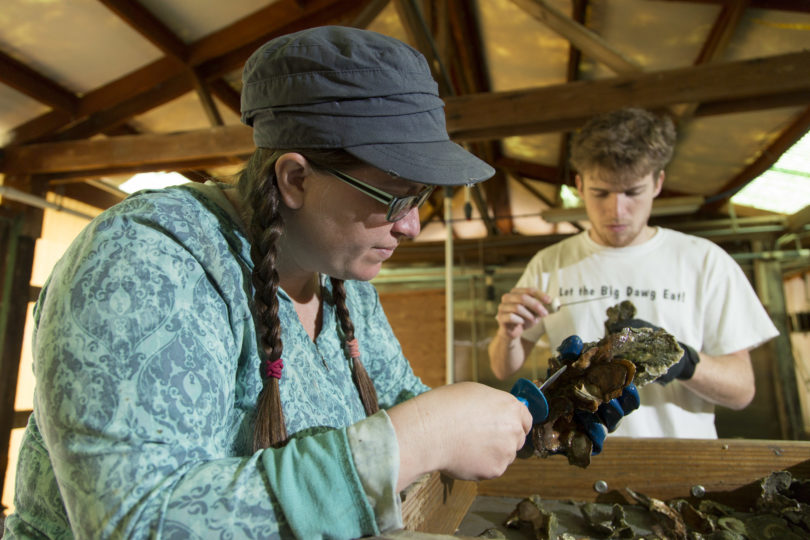 Alyssa Gehman found that organisms infected with parasites may be more sensitive to changes in temperature.

Organisms infected by parasites may respond differently to changes in temperature than their uninfected counterparts, according to new research from the University of Georgia. The study of a host-parasite system in coastal waters of the southeastern U.S. found that a rise of just 2 degrees Celsius could be enough to cause the parasite to die out locally, as infected hosts are not able to survive at the higher temperature.

“Most organisms are infected by some parasite, and many populations will have a large proportion infected—in this system, up to 30 to 40 percent,” said lead author Alyssa Gehman. “When that large a proportion of the population has a different response to temperature, it affects the whole population’s response. So if we want to be able to predict how organisms are going to respond to environmental change, we need to be able to predict how infected organisms will respond.”

The study, “Host and parasite thermal ecology jointly determine the effect of climate warming on epidemic dynamics,” appears in the Proceedings of the National Academy of Sciences.

The research is focused on a population of flatback mud crabs living on oyster reefs near Savannah, Georgia, and an invasive parasite that infects them. Mud crabs are a common species from Massachusetts to Texas. The parasite, a type of barnacle native to the Gulf of Mexico, is now found along the Atlantic coast from Florida to Long Island Sound. It castrates its host and develops an external reproductive organ that produces parasite offspring. These are released into the water as free-swimming larvae that seek out new uninfected crabs to serve as hosts.

Gehman, at the time a Wormsloe Institute for Environmental History Fellow and a doctoral student in the Odum School of Ecology, was working with this host-parasite system on a different research question when she noticed that infected crabs were dying in high numbers in late summer.

Intrigued by the high summer mortality rate, Gehman worked with Odum School professor Jeb Byers to design a series of laboratory experiments to establish the temperature ranges for the parasites and for the crabs at different stages of the disease cycle: uninfected, exposed (colonized by the parasite but not yet producing parasite offspring) and infected (actively producing parasite offspring). She also looked for the optimal temperatures for crab survival and parasite reproductive success.

Working out of UGA’s Skidaway Institute of Oceanography in Savannah, Gehman was able to conduct her experiments adjacent to the study organisms’ natural habitat. She collected crabs at all three stages of disease from local oyster reefs and over an eight-month period subjected them to different temperature treatments spanning the annual range of temperatures for the region. For crabs, she measured survival rates by infection status, and for parasites, the rate of reproduction.

She found that there were big differences in survival rates of uninfected, exposed and infected crabs and in parasite reproduction depending on temperature.

“These difference show that the parasites affect how hosts respond to temperature,” Gehman said. “As temperatures rise, parasite infection lowers the hosts’ rate of survival.”

To determine what is likely to happen to these organisms as the climate warms, Gehman worked with co-author Richard Hall of the Odum School and the College of Veterinary Medicine to develop a model that represents the host-parasite system, taking into account the different stages of the disease cycle using the information gleaned from the experiments.

“Alyssa’s temperature experiments provided a unique opportunity to develop models that predict infection dynamics under future warming,” said Hall. “While there is increasing interest in understanding temperature effects on disease-carrying organisms such as mosquitoes, this was one of the first studies to quantify how temperature and parasite infection interact to influence host survival and parasite production. We can then use these models to explore how annual temperature variation, and future warming, will influence parasite transmission at the Georgia coast and beyond.”

They ran the model using weekly mean temperature data calculated from the Georgia Coastal Ecosystem Long Term Ecological Research site, which has logged water temperatures in the area for 12 years. The portion of the crab population infected showed a pronounced seasonal cycle, with infection rates highest in the cooler months of winter and early spring, dropping off in late spring and summer as the water temperatures rise and the hosts—and consequently their parasites—die in greater numbers. The model thus captured the same cyclic pattern seen in the parasite in the field data.

“The intricate measurements of real organisms’ responses to temperature wedded to a mathematical model is a highly labor-intensive undertaking, and one that is seldom practiced at this level of detail for large organisms,” said Byers, the paper’s senior author. “But the result was well worth it, because it enables remarkable insight into a real system and sheds light on the importance of comparing host and parasite optimal temperatures and temperature ranges to sharpen disease forecasting.”

To forecast how mud crabs and their parasites are likely to respond under plausible warming scenarios, the team ran the model again with weekly mean temperature increases of 1 and 2 degrees C. They found that with a 1 degree C rise, infection rates will drop; with a rise of 2 degrees C, the local population of the parasites is predicted to die out completely.

Gehman then looked at the impacts of rising temperatures across the northern part of the parasite’s range, using information provided by the National Estuarine Research Reserve system, which has been collecting temperature data at sites along the Atlantic coast for many years.

They found that warming is not likely to cause the parasite to move farther north. However, for latitudes between 34 and 40—roughly from just south of Wilmington, North Carolina, to just north of Toms River, New Jersey—they found that as temperatures rose there would be more weeks during the year with conditions favorable for transmission. So while the parasite’s range is not likely to expand and may even be reduced if it dies out in the south, there may be more transmission in its current northern locations.

Gehman cautioned that this prediction assumes that neither the parasite nor the host will adapt to rising temperatures.

“Many mosquito-borne diseases are expected to increase in temperate regions under climate change, but this research shows that a warmer world is not always a sicker world,” said Byers. “It is important to look at the specifics of the thermal responses of both host and parasite.”

Support for the research was provided by the Wormsloe Institute for Environmental History, the M.K. Pentecost Ecology Fund, and the Odum School of Ecology.