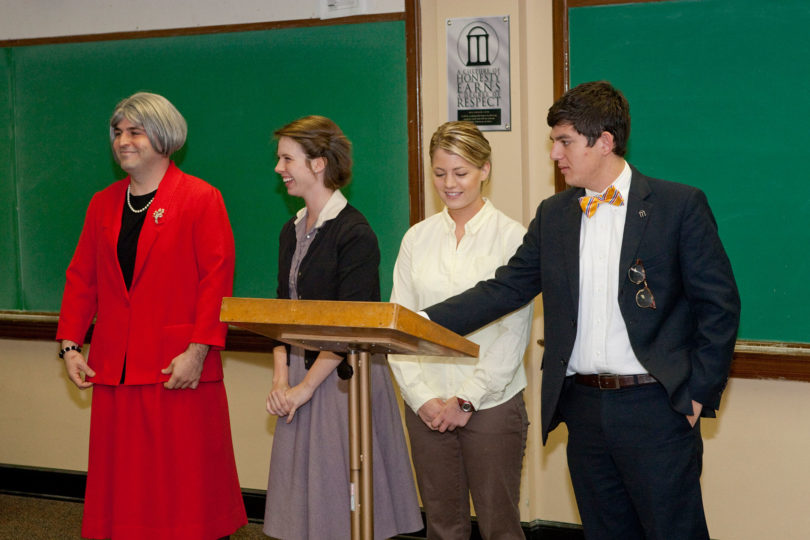 When two African-American students integrated the University of Georgia half a century ago, no one dreamed that some day a class here would re-enact the event and its social context. That’s exactly what’s happening, though, as Barbara McCaskill’s English and African American Studies 4880 class this semester has been working toward a richly textured and deeply researched reaction to events that helped bury the injustices of Jim Crow in the South.

The class is part of a relatively new pedagogy called Reacting to the Past. “Reacting,” according to UGA’s website for the program, “consists of elaborate games, set in a specific time and place. Students play sustained roles in a structured four-week game, speaking and writing in character on issues of the day.”

“For the first part of the semester, we have been talking about the background of the events surrounding the desegregation of UGA, and the students have been creating characters they will play when the game begin later this month,” said McCaskill. “One of the really interesting things about the game is that students will be asked to step outside their comfort zones. For instance, men may play women, whites may be black characters and someone may be asked to represent a political position that doesn’t represent her or his own position at all.”

The 23-student class will be divided into three groups: those who support integration; those who oppose it; and those among faculty, students and the community who simply aren’t sure.

“This is a remarkably flexible pedagogy that bridges the span from ancient history to modern history, from the global stage to the local,” said Naomi Norman, head of the classics department at UGA and director of the Reacting to the Past program on campus. “One outstanding aspect of Barbara’s game is that students are designing and building the game with her, which means that they are considering the important issues surrounding the desegregation of UGA and are studying and approaching that important historical moment from a variety of perspectives.”

While most students are aware of tragic moments in the civil rights movement such as the assassinations of key figures such as Martin Luther King Jr. and Medgar Evers, many of them have a much harder time understanding Southern society in the 1950s and ’60s when it came to race.

“One question they have asked a great deal is how educated, informed citizens could embrace segregation,” said McCaskill. “And they have learned that during the Jim Crow era there was a society in the South built on paradoxes and contradictions.”

Reactions to McCaskill’s class from colleagues in English and history at UGA have been positive. Mark Carnes of Barnard College, founder and national director of the Reacting to the Past program, was strongly supportive when she described it to him, said McCaskill.

A former General Sandy Beaver Teaching Professor (2005-08), McCaskill specializes in African-American and multicultural American literature. She co-edited Post-Bellum, Pre-Harlem: African American Literature and Culture, 1877-1919, a collection of 15 original essays, and also published Running 1,000 Miles for Freedom: The Escape of William and Ellen Craft from Slavery. She supervises students in independent research for the Civil Rights Digital Library, which earned the 2010 Helen and Martin Schwartz Award for Public Humanities Programs.

The goal of the “Reacting” debates on UGA integration that began in April after all the preliminary research and study, is for each group to try and convince those from other groups to join them. The teams will clearly face emotional and sometimes edgy ideas as they debate. The most valuable lessons, McCaskill said, may come not from the campus riots that accompanied integration but from those of good will who had to struggle to understand the rapid and necessary change of Southern society in abandoning a social structure that had been in place for two centuries.

McCaskill said the composition of the class has made the prospect of the role-playing game exciting, since there is a mix of ages and races that will force everyone to confront issues that are historical and personal, head-on.

Reacting to the Past was introduced at UGA in fall 2003 and has now been used in Greek, Latin, English, classical culture, theater and drama, speech communication, comparative literature, political science, religion and women’s studies courses at UGA.

So far, close to 1,000 undergraduates (some of whom serve as student preceptors the following year) and 25 faculty have been involved with Reacting classes at UGA. Reacting has been introduced into Residential Colleges, Student Learning Communities, first- and second-year composition classes, Honors classes and a study-abroad program.

Once the game begins, students run each session, while the instructor advises and guides them on research topics pertinent to the game and grades their oral and written work. In character, over a four-week period, students conduct research and then deliver persuasive speeches in an assembly, as they debate and negotiate issues of the day. More than 250 colleges and universities use Reacting pedagogy in some manner. McCaskill hopes the UGA desegregation “game” will one day be played by student groups worldwide to show others how society changes.

“We hope that subsequent classes here and around the country will be able to play the game and learn about the cultural attitudes and legal policies that influenced this moment in Georgia history,” said McCaskill.