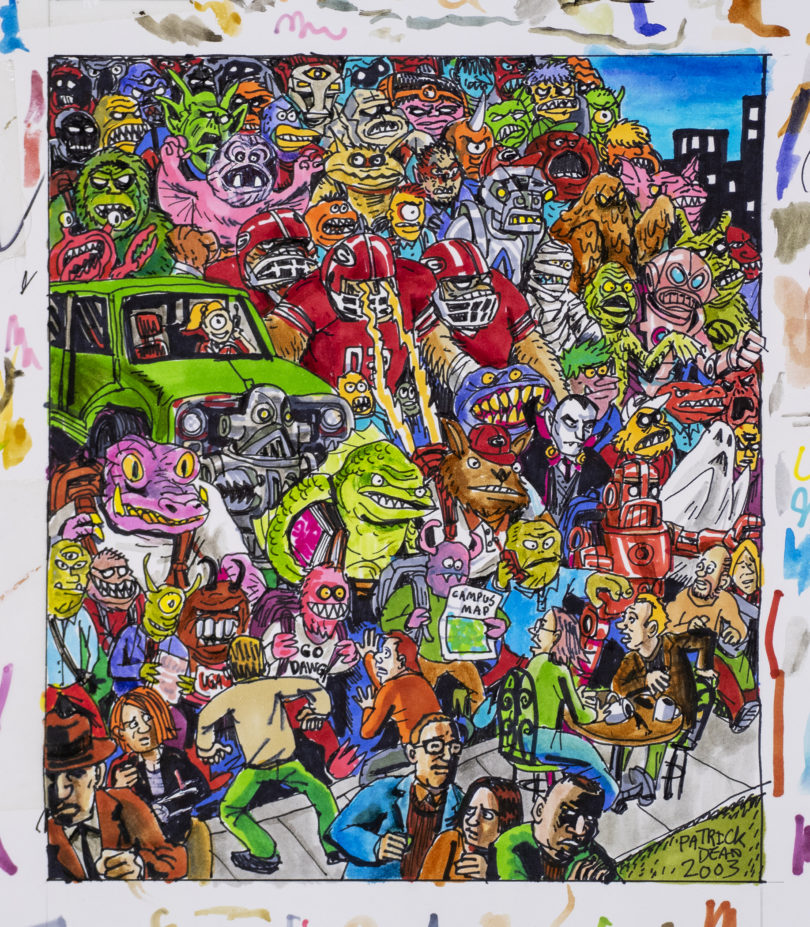 Those who lived in Athens between 1997 and 2006 saw cartoonist Patrick Dean’s work weekly in Flagpole magazine, whether on a cover, in his weekly strip or in illustrations inside. Influenced by Jack Davis, George Grosz, Tomi Ungerer and early Mad Magazine, he populates his scenes with a wide variety of characters interacting with one another, capturing a broad range of Athens’ population. Jokes abound, and monsters are humanized as much as people are monsterfied.

Born in Rome, Georgia, Dean relocated to Athens to attend the University of Georgia, from which he received a Bachelor of Fine Arts degree in graphic design in 1998. In 2018, Dean was diagnosed with amyotrophic lateral sclerosis (ALS), also known as motor neurone disease (MND) or Lou Gehrig’s disease. Dean continues to draw, even as it became much harder for him to do so, and posts his drawings on social media regularly. An exhibition of his works, “The Monsters Are Due on Broad Street: Patrick Dean,” will be on view at the Georgia Museum of Art at the University of Georgia from Dec. 21 through March 29 and will showcase 19 original drawings and prints as well as several of Dean’s sketchbooks.

Dean believes that comics convey ideas rather than stories and that they can be as simple or as complicated as the conveyer wants them to be. As a kid growing up in the 1980s, he would copy newspaper strips in notebooks and replace the figures with his own characters; although he compares this method to doing a bad cover of a classic song, he still believes that one can learn from looking at the work of favorite comic artists. He also thinks it is important to move on from mistakes. He gives this advice when asked about how people view comics’ artists versus painters and illustrators: “Just because in the past most comics were on disposable newsprint, a lot found them to be slumming it. By this time, I’ve quit caring what anyone thinks of comics making.” Comics artists are fully capable of going toe-to-toe with other artists; for those looking to make their own art, Dean advises keeping a sketchbook and drawing every day, despite his own increasing difficulties doing so.

Using expensive paper, brushes and inks makes quickness and simplicity harder to achieve, so even though Dean has upgraded from copy paper and a ballpoint pen to do his work, he still doesn’t shell out much money on art supplies. To him, any kind of story can be told through that simple form, “from a slice-of-life tale to some crazy sci-fi fantasy,” which is exactly what he does. Some of his stories are humorous; others, as with a recent mini-comic addressing his diagnosis, are more serious.

The exhibition’s curator, Hillary Brown, is the director of communications at the museum as well as a writer for the Comics Journal. As she planned the exhibition, Brown worked with an undergraduate graphic design class at UGA’s Lamar Dodd School of Art, taught by Julie Spivey, professor of graphic design. Looking through Dean’s works and visiting the exhibition space, students worked in groups to make proposals for signage, publications, promotional ephemera and more. One group designed a font based on Dean’s handwriting. Brown and Spivey originally intended the collaboration as more of an exercise for the students, a way to give them a concrete project on which to practice working with a client and creating deliverables, but many of their proposals were good enough to incorporate into the exhibition, and the museum may use some of their other ideas in the future.

In addition to Flagpole, Dean’s comics and illustrations have been published in Legal Action Comics, Typhon, the Comic Eye, Vice Magazine and the Oxford American Magazine as well as UGA’s alumni magazine.

Events connected with the exhibition include:

All programs are free and open to the public unless otherwise noted.