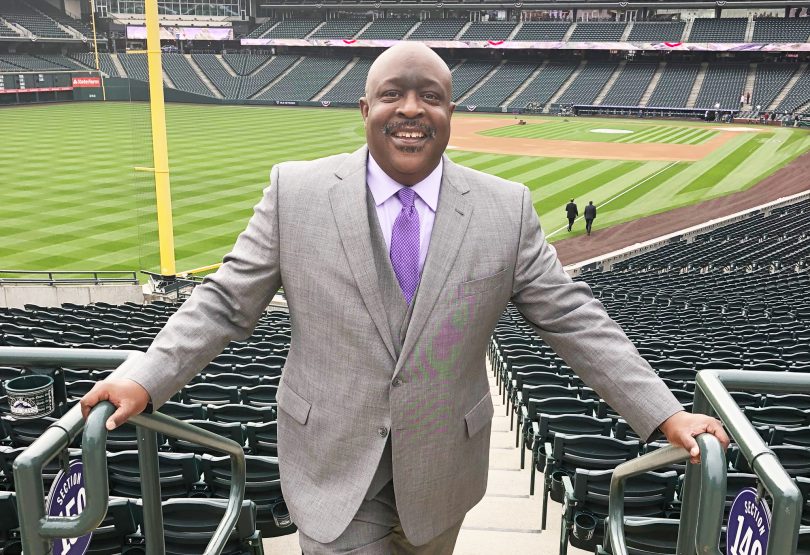 Paul Egins BS '86 has worked in the front office of the Colorado Rockies since 1991--18 months before the team took the field for their first game. Now the team's senior director for major league operations, Egins accompanies the players on every road trip. Working with the players so closely, he frequently becomes their friend, confidante, and advocate. (Photo Special)

When Hank Aaron offers you a job, you take it.

Over Christmas break in 1986, Paul Egins was just a few months removed from his UGA graduation and in the middle of a graduate assistantship at Florida A&M University when his phone rang. It was the Braves Hall of Famer. At first, Egins thought it was a friend playing a prank on him. Several pals knew he’d sent the team his resume, and he expected little would come from it.

Then he recognized Aaron’s voice. And he stood up straight.

“I was blown away,” Egins recalls.

Aaron invited Egins BS ’86 to interview for a position as a trainer in the Braves minor league system. A couple days later, in Aaron’s office in the old Atlanta Fulton County Stadium, Egins accepted. That was the start of a three-decade friendship between the two men.

Even after Egins moved on to the Colorado Rockies in 1991, Aaron remained a mentor and a confidante until his death earlier this year. Egins’s move west was a leap of faith, but a carefully considered one.

“I think I kind of knew it then, but moving allowed me to grow,” says the Columbus native. “I always had Hank looking out for me, and I was tuned into Atlanta and Athens, and the state of Georgia, but now 30 years here, it’s been beneficial for me.”

At first, I thought the only way I could get into sports was as an athlete. What I try to tell people now is that there are other opportunities—accounting, PR, training. I try to encourage people: You don’t have to be the ball player all the time.” — Paul Egins, senior director of major league operations, Colorado Rockies

Egins started his job 18 months before the expansion Rockies played their first game. He is now the franchise’s second-longest-tenured staff member. At a time when the team had no players yet, Egins began as assistant director of scouting. He moved on to serve as director of player development and then director of major league operations. He was promoted to senior director in 2018.

Egins serves as the Rockies’ traveling secretary, coordinating arrangements when the team is on the road and in spring training. but his role includes a far wider range of responsibilities. Not only does he coordinate players’ rooming arrangements on the road during the season, he also handles payroll (including daily meal money). During spring training he helps the coaching staff run team meetings.

Since he travels with the players on the road all year, Egins has become a trusted ally and advocate. For him, developing a rapport with athletes harkens back to his days as a UGA student when he was a member of the athletic training staff.

“The players—their livelihood is their bodies. If they are injured or they need treatment, they have to have a certain level of comfort and trust with their trainer,” he says. “We get to know the players on a more personal level than even the coaches do.”

That can be a challenge, too, particularly when players move on. But it can be poignant, as well.

In February, the night five-time All-Star Nolan Arenado was traded from the Rockies to the St. Louis Cardinals, he called Egins to say goodbye. The next call Egins received meant even more. It was Arenado’s parents, who thanked him for everything he did for their son since the day the Rockies drafted him in 2009.

The respect for Egins is something that reaches far beyond Denver. His love for the Georgia Bulldogs, for instance, is well known across the majors. On the road, Egins will often find UGA memorabilia left for him in visiting clubhouses and team hotels.

Egins also understands the importance of his role as an African American in a major league front office.

“You always want to be good at your job. But I really feel like I have to be good,” he says. “Because I need to stay in this position so people can see me, identify with it, and hopefully encourage them to take a similar path.”

“At first, I thought the only way I could get into sports was as an athlete,” he says. “What I try to tell people now is that there are other opportunities—accounting, PR, training. I try to encourage people: You don’t have to be the ball player all the time.”