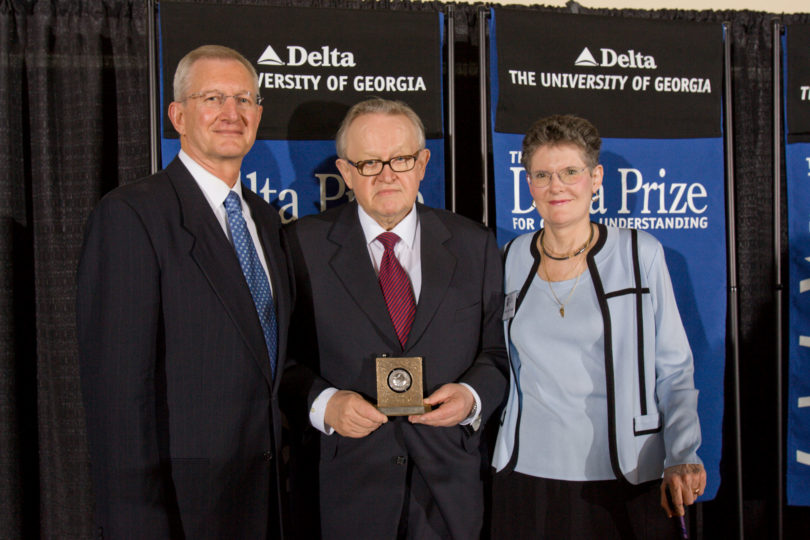 Martti Ahtisaari, the former president of Finland, received the 2008 Delta Prize for Global Understanding at a banquet on campus April 3. Delta Air Lines and the university present the prize annually to an individual whose initiatives have helped promote world peace.

At the banquet, Ahtisaari, who served as Finnish president from 1994-2000, called for peacemakers to use all available strategies at their disposal to negotiate deals. In the new era of global media and non-state powers, entities that work outside of government are essential in the peacemaking process, he said.

“My intention today is to talk about the different actors in peacemaking and highlight the benefits of taking a multi-pronged approach,” he said.

By negotiating with entities that work outside of governments but still maintain influence, peacemakers can increase their chances for success, Ahtisaari said. Private businesses, multinational organizations and non-state agents all play pivotal roles in stemming violence and should be confronted in the most efficient way possible, he said.

“Peacemaking can only take place when there’s a genuine desire by all partners to avoid further violence,” he said.

Ahtisaari, who founded the independent Crisis Management Initiative that helped broker peace between Indonesia and the Free Aceh Movement in 2005, also called for expanded roles of women in peace talks and greater support for multinational agencies, like the United Nations and European Union.

“I have worked now with the U.N. for 31 years. We are all aware of the constraints of the U.N., but the U.N. is the only U.N. we have. It holds a lot of ability for legitimate international achievements,” he said.

His post-presidential activities include monitoring the decommissioning of IRA weapons in Northern Ireland; chairing an independent panel on the security and safety of U.N. personnel in Iraq; and serving as U.N. special envoy for the Kosovo status process, U.N. special envoy for the Horn of Africa and personal envoy of the chairman of organization for security and cooperation in Europe for Central Asia.