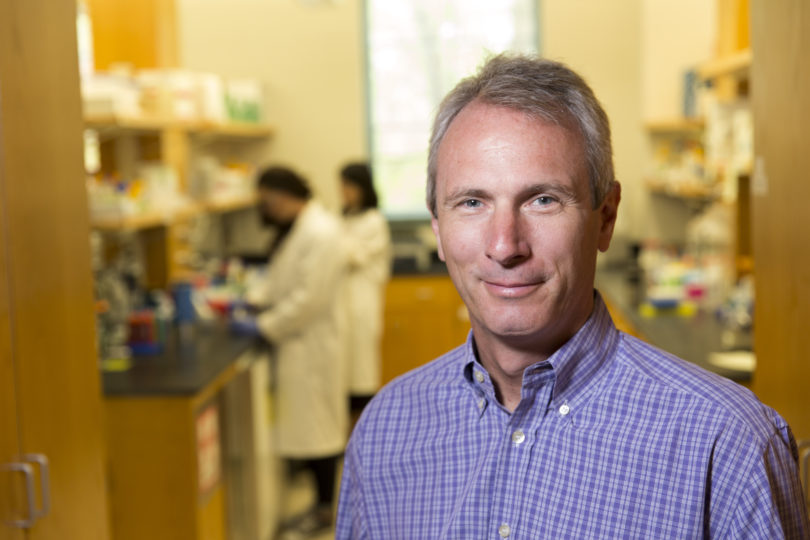 The Peanut Genome Consortium has mapped the genetic code of the peanut. The consortium, a group of scientists from the U.S., China, Japan, Brazil, Argentina, Australia, India, Israel and several countries in Africa, is led by UGA professor Scott Jackson. (Photo by Andrew Davis Tucker)

An international group of agricultural scientists, including University of Georgia and USDA scientists based in Georgia, have mapped the genetic code of the peanut. Results of the five-year research project give scientists around the world a map with which to unlock some of the genetic potential of the peanut plant.

“Mapping the genetic code of the peanut proved to be an especially difficult task, but the final product is one of the best ever generated,” said Steve Brown, executive director of The Peanut Foundation. “We now have a map that will help breeders incorporate desirable traits that benefit growers, processors, and most importantly, the consumers who enjoy delicious and nutritious peanut products all over the world.”

This discovery by the Peanut Genome Consortium, a group of scientists from the U.S., China, Japan, Brazil, Argentina, Australia, India, Israel and several countries in Africa, gives scientists the capability to find beneficial genes in cultivated and wild peanuts to use in breeding new peanut varieties. These traits can lead to greater yields, lower production costs, lower losses to disease, improved processing traits, improved nutrition, improved safety, better flavor and virtually anything that is genetically determined by the peanut plant.

“Study of peanut genome structure and order makes a great detective story, where many clues are found and linked together to unlock mysteries of genetics and gene regulation. This is exciting work,” said UGA College of Agricultural and Environmental Sciences Professor and Georgia Research Alliance Eminent Scholar Scott Jackson, co-chair of the consortium.

In 2012, the U.S. peanut industry urged The Peanut Foundation to initiate a research program to map the genetic code of the peanut plant. The resulting International Peanut Genome Initiative is the largest research project ever funded by the industry, with the $6 million cost shared equally among growers, shellers and manufacturers. Peanuts are a staple in diets across the globe, from the Americas to Africa and Asia. They are also a key ingredient in Ready-to-Use Therapeutic Foods that treat severe acute malnutrition and a crop that farmers in developing countries rely on for personal and community economic well being.