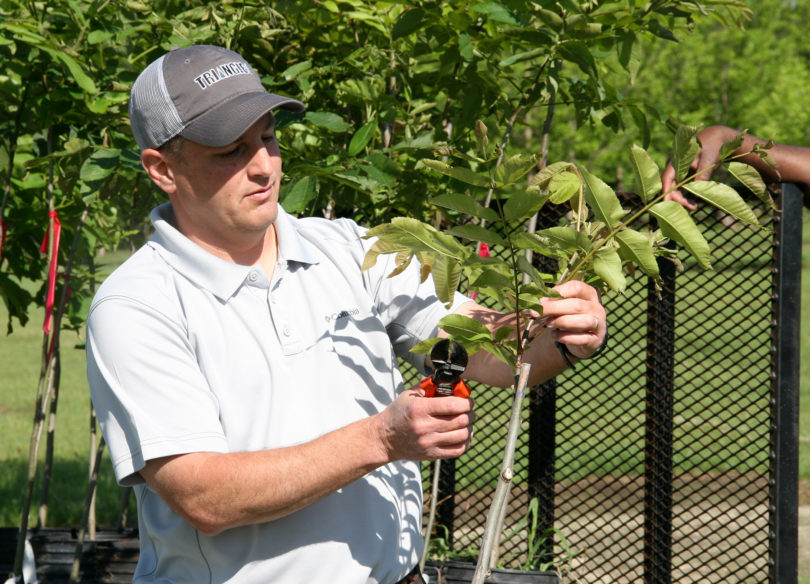 Instead of the 110 to 120 million pounds projected more than a month ago at the start of the harvest season, Georgia is now expected to produce between 90 and 100 million pounds of pecans, Wells said.

Wells’ forecast comes on the heels of the start of the pecan harvest, when weather conditions were less than ideal. Georgia producers prefer cooler temperatures and drier weather, which help to preserve the crop for as long as possible on the tree. This fall’s warmer temperatures combined with recent rain showers led to a deterioration in the quality of this year’s Georgia pecans.

“We’re starting to see some quality issues to the point that the percent of the kernel (that’s filled) is running a little bit low, lower than normal,” Wells said. “The size of the pecans is good, but to some extent that could be part of the problem. Any time you have a large nut size with a heavy crop load on the tree, it’s hard for the tree to fill those kernels, even under the best conditions.”

The UGA Extension expert blames cloudy weather toward the end of September for the reduced kernel fill.

“Any time we get extended periods of cloudy weather during kernel-filling time, that can cause some problems for us and make it harder for that tree to fill the nuts out,” Wells said. “I think that’s a lot of the problem we’re seeing with the quality being lower than we’d like to see.”

Wells said unseasonably warmer temperatures this fall—above 80 degrees during October and November—followed by heavy rainfall also led to sprouting in Stuart varieties. Sprouting refers to premature germination of the seed while it is still on the tree.

“If you see a lot of the Stuart variety in the trees that have not opened up yet, a lot of times those nuts may have already sprouted,” Wells said. “The pecan itself is a seed. When you have high moisture conditions and warm temperatures, it will stimulate that nut to germinate and sprout.”

In addition to weather-related problems, Georgia pecan growers fought late-season aphids and spider mites in September. Producers had to apply additional spray applications to preserve their crop, he said.

Wells recommends growers shake the trees and harvest the nuts as soon as weather conditions allow.