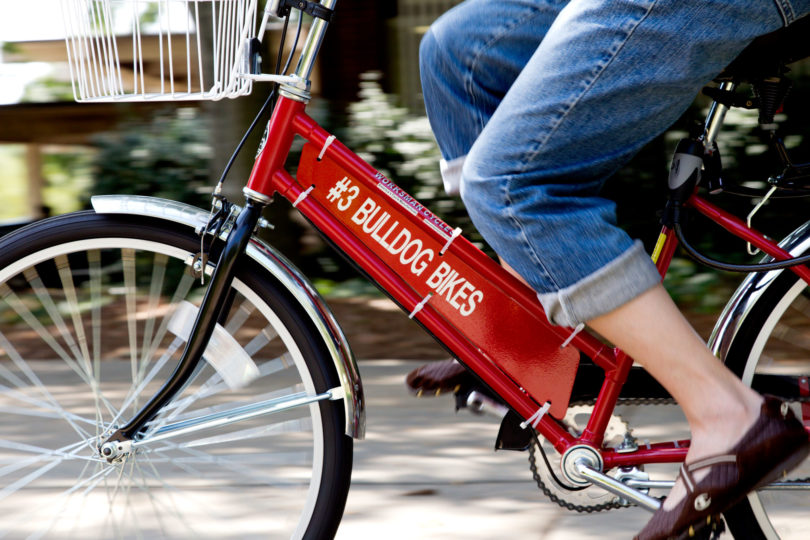 The Bulldog Bikes program was started with a campus sustainability grant in 2011. Under the program

When Bulldog Bikes spun to life on campus this fall, UGA students weren’t the first to put shoe to pedal on the red beach cruisers. UGA Facilities Management employees in the Chicopee Complex had been testing the bicycles for months.

Paul Burke and Jeff -Willoughby, who have both worked in shipping and receiving as material handlers for seven years, usually walk the length of Chicopee’s warehouse at least 10 times a day. That’s a lot of time on foot in a building that stretches 175 yards. The bicycles didn’t have much chance of sitting still.

“You can cut down a lot of walking time on these bikes,” Willoughby said.

Plus, there’s a fun factor.

“It takes me back to my childhood,” Burke said.

The Bulldog Bikes program was started with a campus sustainability grant in 2011. Sheena Zhang was a senior at UGA when she proposed the project, which is now run by the Office of Sustainability and handled in part by Ben Dymecki, a fifth-year student at UGA, and Kevin Kirsche, UGA director of sustainability.

“There was a lot of interest in doing a bike sharing program on campus,” Kirsche said.

“Athens already has a pretty good bike culture for a college town,” he said. “We’re trying to get the message out there to even more people.”

Due to liability issues, the Office of Sustainability faced a long approval process for the program, which is currently in its pilot phase. While they waited, they stored the bikes in Chicopee’s warehouse.

Bulldog Bikes is much like a library for bicycles. Students, faculty and staff can check out the bikes—along with their corresponding locks and required helmets—and ride them around campus and into town. Bikes must be returned by the end of the day to the same location from which they were checked out.

Checkout and check-in times vary according to the three pilot locations. For example, the ecology building is staffed from 8 a.m. to 5 p.m., so bikes must be returned by 5 p.m. At Building 1516, the hours are 7 a.m. to 10 p.m. And at the Chicopee Complex, “we have a high-tech key box system,” Kirsche said. “It will be more automated.”

Initial reaction to the program has been mixed. Kirsche and Dymecki had hoped to interest enough participants through in-person meetings, but they’re finding that online registration may be a better solution. At one campus meeting, they had 30 attendees.

At another, “three girls came for that one,” Dymecki said. “They were interested in using the bikes to get back and forth from intramural practice.”

Originally, the departmental bike fleet pilot program was open only to those people who worked or lived in a particular building on campus. In hopes of expanding registration, the Office of Sustainability will offer the program to students, faculty and staff in other buildings convenient to ecology.

“It’s a great way for students—and faculty and staff—to get around campus and into town and back,” Kirsche said.

Plus, he said, the UGA campus  benefits from another transportation option, especially a healthy one that has environmental benefits.

The program’s newness isn’t the only aspect that makes it unique. The bicycles, which have internal hubs and both hand and foot brakes, were made by Worksman Cycles, a New York City-based company that has been hand-crafting bicycles since the early 1900s. Worksman Cycles is a solar powered business focused on sustainability, which is what Kirsche and his office were looking for in a bicycle manufacturer for the program.

“The bikes are intended to be really sturdy, and hopefully they’ll stand up to significant use,” he said. “They’re similar to beach cruisers. They have thick, cushy seats; a big, loud bell to ring; and they’re painted all red.”

The bikes, which are one-size-fits-all, have seats that easily raise and lower to adjust for height differences.

The ultimate reason to give the bikes a spin may not be the cushy seats, the environmental benefits or the increased transportation speed, Kirsche said. It’s because riding a bicycle “makes life more fun.”