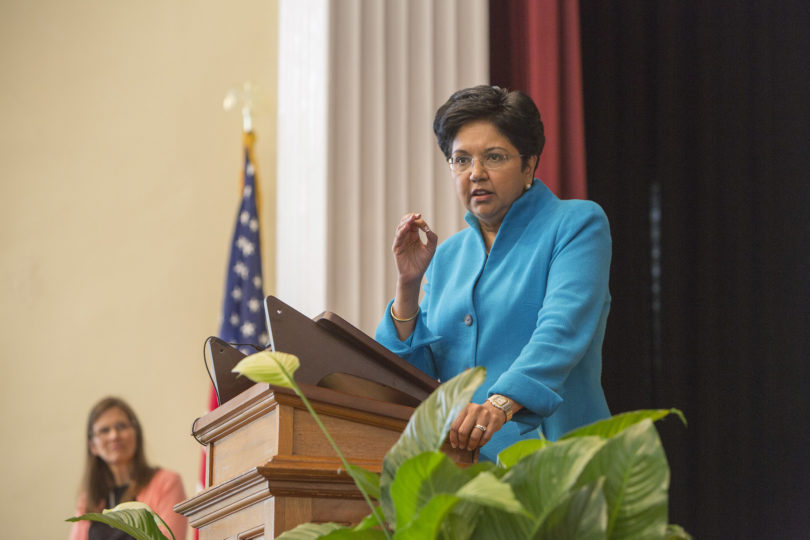 PepsiCo Chairman and CEO Indra Nooyi spoke to university students and faculty on Oct. 1, discussing the role and responsibilities of corporations as well as her company’s Performance with Purpose strategy, which strives to deliver sustainable financial success by operating in line with the needs of society.

Nooyi, the chief architect of Performance with Purpose, addressed a large crowd composed of members of the School of Law, the Terry College of Business and the School of Public and International Affairs in the Chapel. She said that when she joined PepsiCo in the 1990s, “it became very clear the world around us was changing in profound ways, and we needed to evolve our company in anticipation of these changes.”

After her appointment to CEO in 2006, Nooyi placed renewed emphasis on research and development and made strategic business moves, including several acquisitions, expansions and inclusions of new products. By doing so, PepsiCo was able to create a plan that would allow for both profits and progress, according to Nooyi.

The multibillion-dollar corporation places a focus on three types of sustainability-nutritional, environmental and talent-to meet the company’s needs and expectations, Nooyi said. With additions to the PepsiCo family such as Tropicana and Quaker Oats, the company’s nutrition business now accounts for 20 percent of its revenue. The food and beverage giant also looks for ways to minimize its carbon footprint and focuses on attracting and retaining “the best of the best,” Nooyi said, adding that the company embraces diverse perspectives in an environment where “everyone can bring their whole selves to work.”

Nooyi shared several examples of Performance with Purpose in action at PepsiCo. These actions include partnering with local suppliers in India to change agricultural practices that have reduced water usage so much so that by 2009, PepsiCo India estimates it conserved more water than it consumed. Also in India, the company has found ways to add the generally unused fruit from cashews into some of its drinks, creating a business opportunity for PepsiCo while providing local farmers with a new source of income.

The company also created a program called PepsiCorps, which gives its employees the opportunity to work in underserved parts of the world “to improve economic, social and environmental aspects of communities.” What these groups have done is “simply outstanding,” Nooyi said, noting that through sanitation work in Ghana, rainwater harvesting in India and the creation of gardens in New Mexico, employees have been able to return to the corporate world with new perspectives, which is “critical” for a global company.

“At PepsiCo, you can change the company and make a difference in the world at the same time,” Nooyi said.