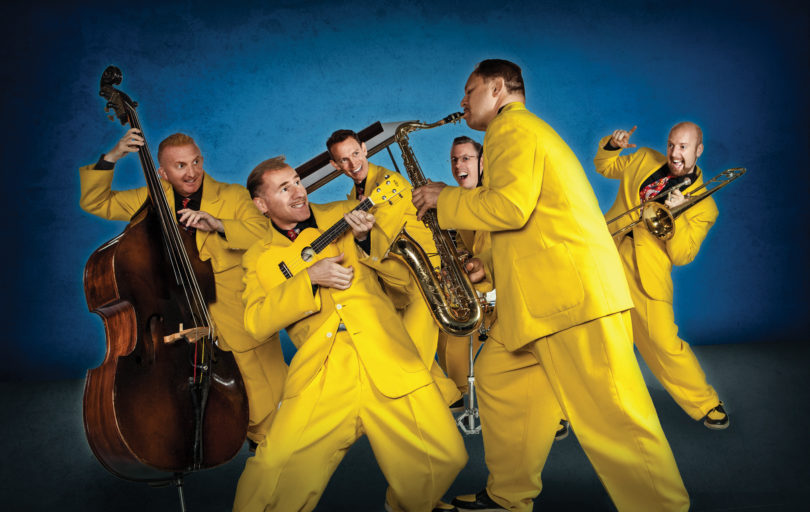 The UGA Performing Arts Center will present the Jive Aces Dec. 2 at 8 p.m. in Hodgson Concert Hall. The band will feature vocalist Toni Prima along with special guests from the UGA Ballroom Dance Performance Group.

Tickets for the Jive Aces are $35-$40 with special discounts for UGA students. Tickets can be purchased at the Performing Arts Center, online at pac.uga.edu or by calling the box office at 706-542-4400.

After becoming the first band ever to reach the semifinals of Britain’s Got Talent, the Jive Aces performed for Queen Elizabeth’s Diamond Jubilee celebration and the London Summer Olympics. With their brightly colored yellow suits and high-energy shows, the Jive Aces have now established themselves as the U.K.’s top jive and swing band.

Their latest album, King of the Swingers: A Salute to Louis Prima, was recorded in Hollywood and features Toni Prima, the daughter of music legends Louis Prima and Keely Smith. The album includes the group’s version of the classic “Bring Me Sunshine,” the video for which has garnered more than 2 million views on YouTube along with seven film festival awards.

The Jive Aces have performed at thousands of festivals, theaters and dance halls throughout Europe and the U.S., in addition to making hundreds of television and radio appearances worldwide.