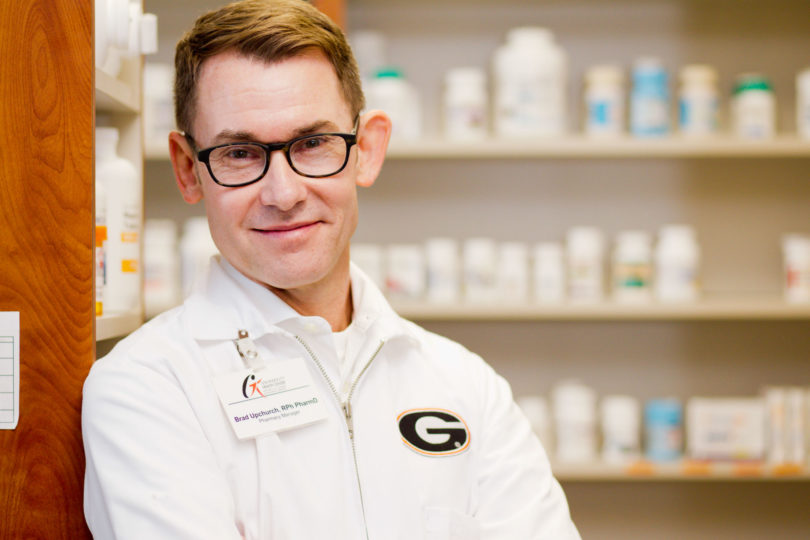 For most of his life, two things have been dominant forces in Brad Upchurch’s life: medicine and the Georgia Bulldogs. Now as manager of the University Health Center’s pharmacy, both of Upchurch’s lifelong passions are combined.

“I went to work in a drugstore when I was 15 back in my hometown of McDonough, and that’s really all I’ve ever done,” Upchurch said. “When I received my pharmacy degree in Gainesville, Fla., I actually wore a big tie with a Georgia ‘G’ on it underneath my gown to the dismay of the dean. I grew up a Georgia supporter and never thought about anything else.”

Upchurch received a bachelor of science in pharmacy from UGA before earning a doctorate in pharmacy at the University of Florida.

“When I went to school down there, I had to convince the people there and up here that I wasn’t sneaking around as a spy,” Upchurch said jokingly.

Prior to arriving at the University Health Center pharmacy in 2007, Upchurch spent time working in retail pharmacies and at Athens Regional Medical Center. He said that being employed by the university has been an honor.

“I’m really lucky to work in Athens and work at my alma mater doing something I want to do. I feel very fortunate and blessed,” he said. “Being able to come back and work for UGA in a professional role has been a humbling experience.”

As pharmacy manager, Upchurch is responsible for a lot of the behind-the-scenes work at the pharmacy. He works to ensure the facility is compliant with all laws and regulations, as well as managing the budget and personnel issues. Upchurch also represents the pharmacy and its interests at various committees and meetings.

“It’s an exciting job,” he said. “There’s something new for me every day.”

And with a staff of 17, there also are times Upchurch gets to use his experience behind the counter as a pharmacist.

“I maintain a current pharmacy license so that I can plug in and be a pharmacist whenever I need to be,” he said. “So when I want to have that personal contact again with customers and work with the staff and students, I can just simply do that. It’s the best of both worlds.”

“We’ve seen our business grow from just patients being seen in the health center to patients who come and stay with us for four years while they’re here,” Upchurch said. “We’ve got some regulars, and that’s been a nice change.”

Upchurch fills a unique role as pharmacist as well as educator to students who may not have much experience dealing with their own health care.

“We can be teachers; we can be health care providers; we can be an ear when they need to talk about something,” Upchurch said. “I’ve worked a lot of different pharmacy roles, and this is different from anything I’ve ever done.”

For Upchurch, being able to educate and help in the healing process is the reward of his career in the pharmaceutical field.

“You really can make a difference,” he said. “When someone thanks you for the time you give them or for having a positive impact on their life and their health, those are the best moments. You don’t have many of those moments, but when you have one, you cherish it.”