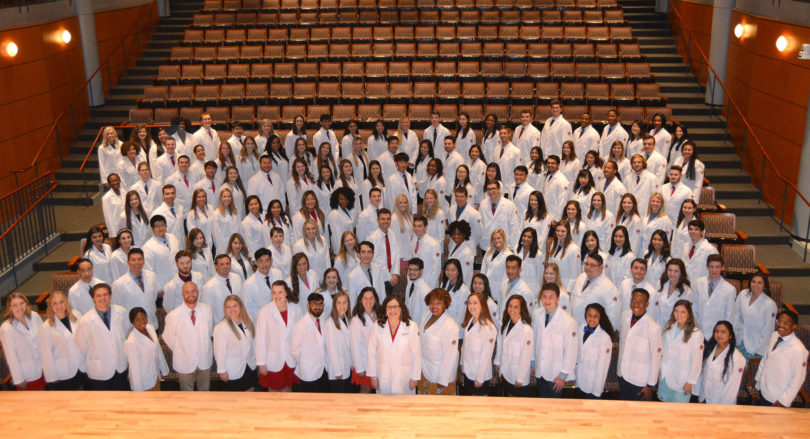 On Aug. 10, the UGA College of Pharmacy held its annual White Coat Ceremony and welcomed 136 new Doctor of Pharmacy students.

Sponsored by The Kroger Pharmacy Company, the ceremony was highlighted with members of the Class of 2023 donning white laboratory coats, which they will wear in various capacities throughout their four-year tenure at the college.

“These 136 individuals will make a mark on our college, their chosen profession and society as a whole,” said Kelly Smith, dean of the College of Pharmacy. “They will spend the next four years working diligently to prepare for the provision of patient care in such settings as community drug stores, hospitals and health care facilities, research laboratories, government organizations and agencies, and more. We are proud they have joined our college and look forward to their accomplishments and service to others.”

The ceremony, which was attended by more than 1,000 students, family members, faculty, staff, alumni and supporters, featured remarks by Dean Smith; Dee Dee McEwen, a 1999 pharmacy graduate and a manager for Kroger Pharmacy; and William Huang, a 2003 pharmacy graduate, president of the College of Pharmacy Alumni Board and a pharmacist for Cancer Treatment Centers of America. McEwen and Huang officially coated the students.

Statistically, members of the Class of 2023 average 21.7 years of age. Georgia is listed as the home state for 95% of the students, with the remaining 5% hailing from other areas throughout the world. More than 55% previously attended UGA, and 15% are first generation college attendees. Academically, the group exceeds national pharmacy school averages. The average GPA was 3.42 as compared to the 3.32 nationally, and the average ranking for the Pharmacy College Admission Test was 72.7% compared to 59.4% nationwide.