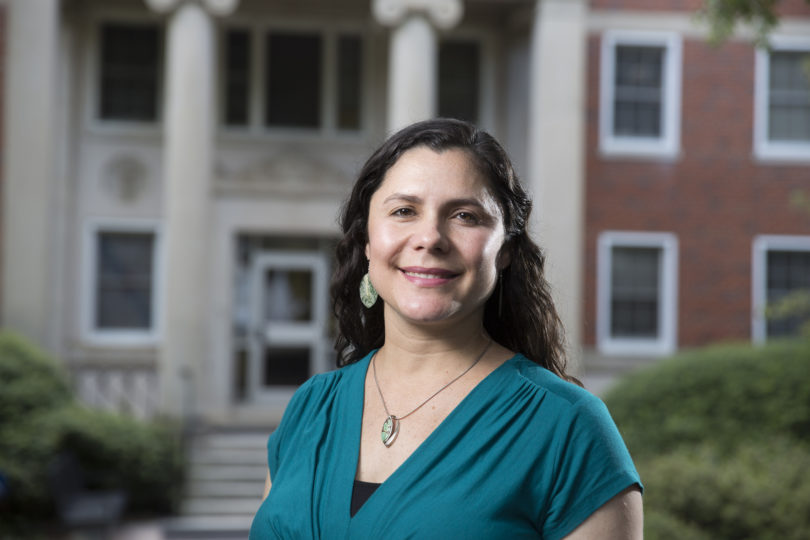 As curriculum coordinator of the UGA Portuguese Flagship Program

As curriculum coordinator of the UGA Portuguese Flagship Program, Cecilia Rodrigues advocates for international opportunities for students with a twist on an old saying: Practice what you teach.

A scholar in her third year at UGA with an affinity for travel, language and culture, Rodrigues is in many ways the perfect ambassador for the international career opportunities students unlock by adding language skills to their academic training.

Rodrigues, a native of the northeastern Brazilian state of Ceara, first came to the U.S. as an exchange student. After completing her undergraduate degree at the Federal University of Ceara, she returned to the U.S. for graduate school where her studies in Spanish and Portuguese philology, language and literature blossomed into a passion for research and teaching.

“I’ve always loved teaching and language, so the university was a natural path for me,” Rodrigues said. “I feel a perfect connection with students that is so much more than just being in the classroom and doing research.”

Rodrigues counsels many students who are considering joining the Portuguese Flagship Program, drawing on her own educational experience to provide advice.

“So many students are passionate about languages, living abroad and learning with different cultures and different peoples that they are curious about how I ended up at UGA and want to learn about my path,” she said. “It’s a nice connection to make with students.”

Funded by a multimillion dollar grant from the U.S. Department of Defense National Security Education Program that was renewed for its second four-year cycle in 2016, the UGA Portuguese Flagship Program is the first of its kind in the nation. Focused on helping students enhance their current major with international and linguistic credentials, the program involves study abroad, internships and cultural training, experiences that create expansive career opportunities for some students.

“The idea is for our students to become global professionals,” Rodrigues said. “The students come from all walks of life, with many different kinds of majors, from biology to business, and to that they add a minor or a certificate in Portuguese.”

On the graduate level, Rodrigues teaches contemporary Brazilian literature, from the 19th century to present, including works by Machado de Assis and the novels of Milton Hatoum, about whom she wrote her dissertation.

“His work arises out of all of these cultures, and it’s incredibly beautiful to think that in the middle of the Brazilian Amazon, you have such cultural wealth,” Rodrigues said.

While the richness of the humanities and a love for travel informs Rodrigues’ teaching and writing, she also works to professionalize her graduate students in preparation for the next stage in their careers.

“I try to take them to conferences and show them the importance of presenting your work, of meeting colleagues from elsewhere and also to see what other people are working on,” she said.

Mindful of the job market via her own recent proximity to it, Rodrigues seeks to be a resource for students at every level, whether they are preparing for a career in academia or weighing a decision to add a language to their major field of study.