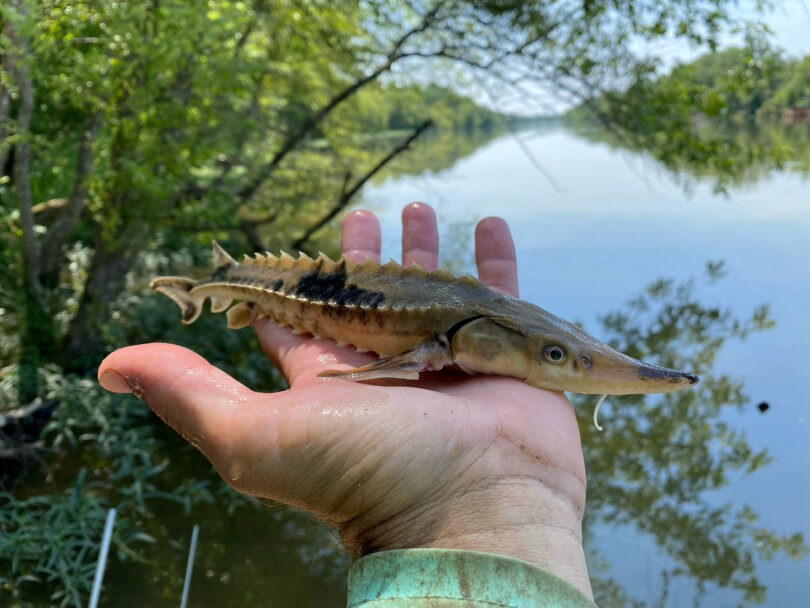 A juvenile lake sturgeon collected in the Coosa River. (Photo by Matt Phillips)

Researchers studying lake sturgeon in Northwest Georgia’s Coosa River have found evidence that the fish may be reproducing for the first time since they were wiped out in the 1970s.

The discovery was made earlier this year, as a team of researchers prepared for a project of tagging and tracking sturgeon in the river system. It’s part of an ongoing effort to assess the population of lake sturgeon since they were reintroduced by the Georgia Department of Natural Resources in 2002. 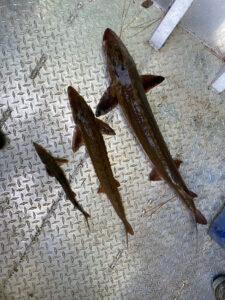 Lake Sturgeon age difference: Sturgeon can take up to 20 years to mature and reproduce. (Photo by Matt Phillips)

It can take 20 years for female lake sturgeon to reach sexual maturity—when they develop black eggs also coveted as caviar. Because of the timespan, fisheries experts were unsure of the long-term viability of the fish, which have been released into the river every year since their reintroduction.

“We found three females that had black eggs—mature eggs that are ready to be fertilized,” said Marty Hamel, an associate professor at the University of Georgia Warnell School of Forestry and Natural Resources. “This was the first time anybody has found a sexually mature female since the reintroduction program began, and it’s exciting because it’s confirmation that they are becoming mature and trying to spawn.”

Why did the sturgeon disappear?

Lake sturgeon are native to Georgia’s Coosa River system, and for generations it was the only place in the state home to the prehistoric fish. But due to poor water quality and over-harvesting—both of their eggs and of the fish itself—sturgeon disappeared from the Coosa in the 1970s.

Thirty years after they disappeared, Georgia DNR began an ambitious project to return lake sturgeon to the Coosa River. “The Clean Water Act really did improve the overall habitat and river quality,” said Hamel. “So, the habitat got better and with a ban on harvesting lake sturgeon, DNR considered trying to reintroduce the population.”

Working with wildlife officials in Wisconsin, which is home to a population of lake sturgeon similar to what was found in Georgia, DNR officials collected lake sturgeon eggs and brought them back to Georgia. There, they incubated and hatched the eggs, then released the fish into the Coosa River.

“In 2002, the Georgia DNR began stocking young sturgeon that successfully spawned in the hatchery, and have continued to do so almost every year since,” said Hamel. “It’s a big investment because you don’t even know if the stocked fish are going to survive, let alone grow up and reproduce. A lot of things must come together to create a self-sustaining population. Because lake sturgeon take a long time to mature and then reproduce intermittently–every two to three years—we really need a robust population of varying size and age classes.”

When Hamel’s graduate students discovered the mature females, they were launching a project to help scientists understand more about the lake sturgeon population. The new discovery infused new energy into a project that began with more questions than answers.

Finding answers to the recent resurgence

The students are catching as many lake sturgeon as they can this summer to get estimates of fish survival, population size and growth rates. They are also implanting radio telemetry tags into the fish to track their movements throughout the year. This will give them a better idea of the places in the river where fish tend to live. 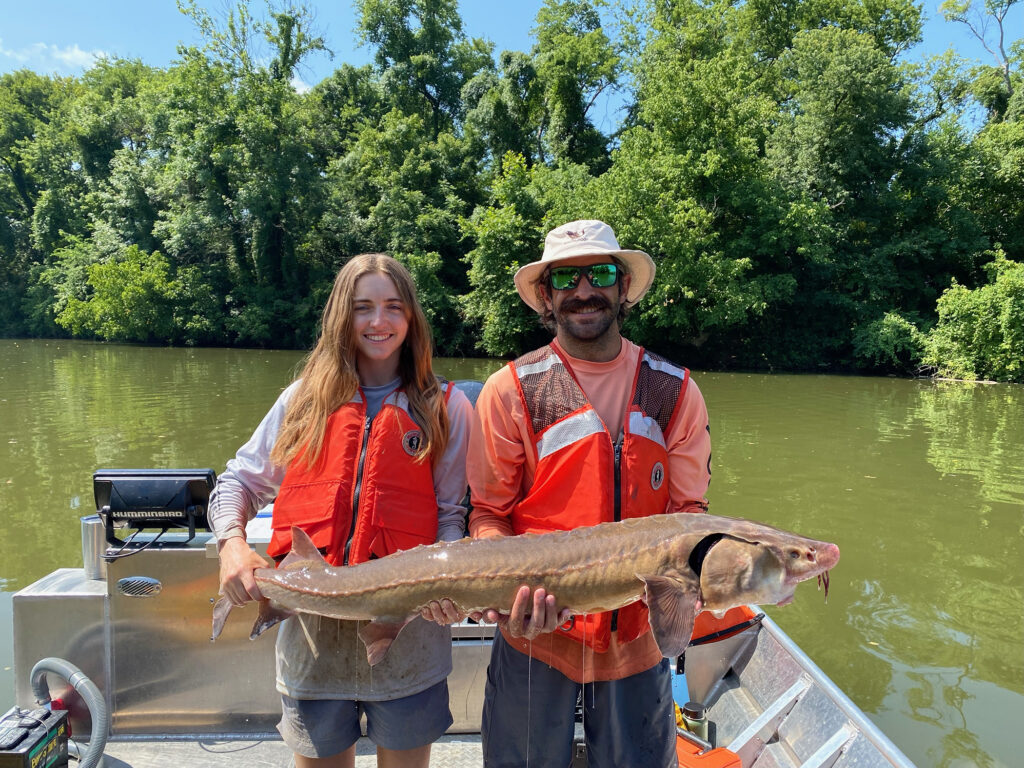 While some fish sampling has been done since the fish were reintroduced 20 years ago, said Hamel, this will be the most comprehensive set of data since the project began. Researchers also get an assist thanks to small PIT tags implanted in hundreds of fish as they were caught by scientists during the past 20 years of the project. The tags—the same technology used to identify cats and dogs by veterinarians—allow recaptured fish to be identified.

“There’s been a lot of questions about long-term survival, growth rates, and when these fish would become sexually mature—and we’re on the verge of determining if these fish are going to successfully reproduce and provide their own progeny,” he added. “So, it’s an exciting time from that standpoint. We’re on the cusp of figuring out these really important aspects to see if the population will be sustainable and ultimately gauge the success of the reintroduction program.”