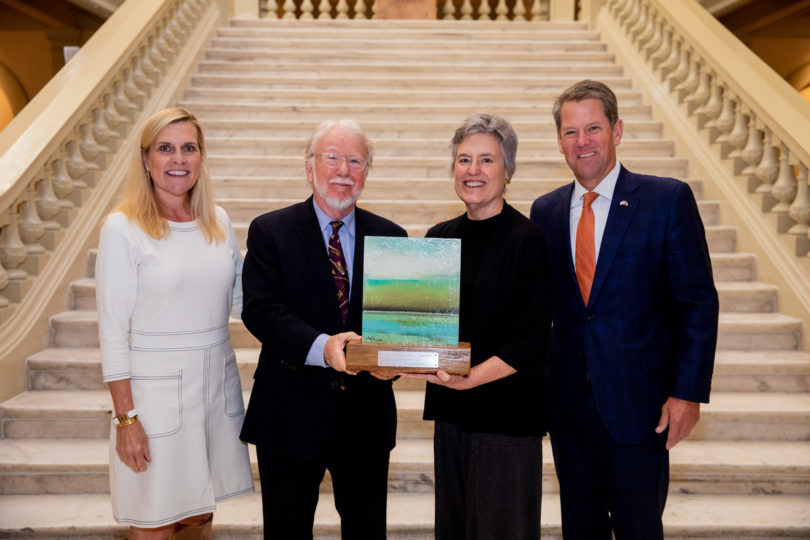 Nominated by the Georgia Museum of Art at the University of Georgia, Athens couple Kathy Prescott and Grady Thrasher received a 2019 Governor’s Award for the Arts and Humanities for their contributions to the cultural advancement of Georgia. These awards are sponsored by Georgia Humanities, in partnership with the Office of the Governor and Georgia Council for the Arts. The awardees were honored at a ceremony at the state Capitol on Oct. 24.

Prescott and Thrasher are both devoted to the arts: she is a visual artist, he is a retired lawyer turned children’s book author, and they are both poets. Together, the pair have poured their talents and time into projects, programs and organizations that enrich the arts and humanities in Athens.

Prescott and Thrasher have influenced the Georgia Museum of Art and UGA as a whole through their involvement in and support of several areas. They helped create the Aralee Strange Fund for Art and Poetry at the museum in 2016 to support academic and public programs in Athens connected to the arts, including the museum’s annual summer programming collaboration with the UGA’s College of Education. They are regular sponsors of the museum’s annual Black History Month Dinner and Awards Celebration, which raises awareness about African American and African diasporic art at the museum and presents awards to African American leaders in the arts.

Prescott has served on the museum’s Board of Advisors since 2001. She and Thrasher have been regular contributors to the museum’s biennial fundraiser, Elegant Salute, as well as to UGA’s Lamar Dodd School of Art and Willson Center for Humanities and Arts. Notably, Prescott provided financial backing for the museum’s Phase II building campaign, which funded its Study Centers in the Humanities.

They have also lent their talents to the Athens community at large. Prescott’s art has been featured in exhibitions at local arts institutions and organizations, and Thrasher was named the Georgia Children’s Book Author of the Year by the Georgia Writers Association in 2008 and 2011. Together, they have directed three documentary films on events originating in Athens, with the assistance of filmmaker Matt DeGennaro. Shown in Athens periodically as a public service and to foster community awareness and engagement, the films include “The World’s Smallest Airport,” “Life the Griot” and “Athens in Our Lifetimes—Recalling the Evolution of Our Town over the Past Six Decades.”

“Georgia is home to a strong arts and humanities culture that fuels creativity and innovation,” said Governor Brian P. Kemp, who presented the awards alongside First Lady Marty Kemp. “Growing and sustaining our arts and humanities sectors can create a catalyst for community revitalization and local economic development across the state. I congratulate the recipients of the 2019 Governor’s Awards for the Arts and Humanities and thank these individuals and organizations for their tireless work toward the advancement of our state.”

Ten members of Georgia’s arts and humanities communities were awarded this honor following a competitive selection process from nominations submitted from around the state. The recipients represent a diverse group of individuals and organizations that have contributed to and supported the growth of Georgia’s thriving creative industries through community involvement, pioneering programs and long-term financial commitment. 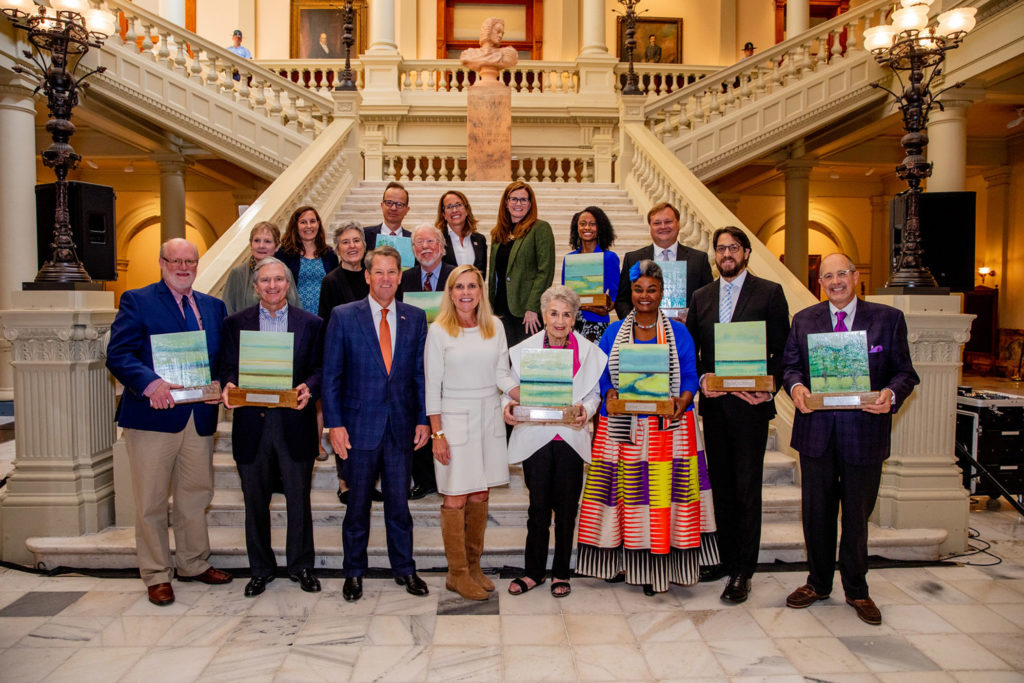 The 2019 winners of the Governor’s Awards in the Arts and Humanities, together with first lady Marty Kemp and Gov. Brian P. Kemp.

Beyond the museum and the university, Prescott and Thrasher have truly influenced the cultural and artistic landscape of Athens. They have sponsored numerous organizations, events and scholarships focused on literacy, the visual and performing arts and youth development.

The museum’s director, William U. Eiland, who won the same award in 2017, said, “The staff at the museum and its patrons continue to amaze me with their commitment to the museum and with their contributions to our city and to our state. I was pleased to be at the capitol when Kathy Prescott and Grady Thrasher received the Governor’s Award for the Arts and Humanities; the governor’s tribute was entirely fitting given their support of so many charitable endeavors in Athens and Georgia as well as their own creative contributions to our shared cultural life through their work in film and the visual and spoken arts.”

Prescott and Thrasher’s passion for and dedication to the community and culture of Athens have made an indelible mark on our town, he also said. They embody the missions of Georgia Council for the Arts and Georgia Humanities to “work to increase the understanding and appreciation of the humanities in our state.” The positive impact of Prescott and Thrasher’s work has been recognized several times in the past, and this well-deserved statewide recognition shows the true scope of their influence.