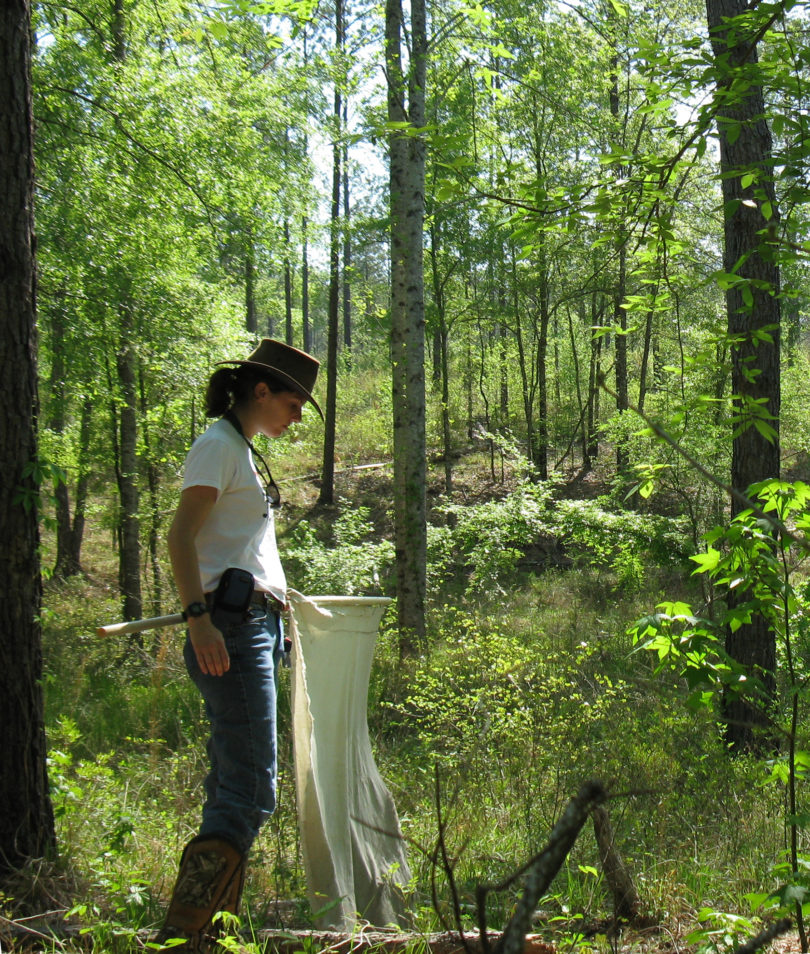 Athens, Ga. – In the spring, summer and early fall months, lone star ticks, the most common type of tick in Georgia, spike in activity and may transmit pathogens that could cause disease in humans. According to newly published University of Georgia research, tick populations can be managed through a technique called prescribed burning.

Elizabeth Gleim, a former graduate student in the Warnell School of Forestry and Natural Resources and co-author on the PLOS One article, performed the research over several years. During that time, she visited 21 plots in Georgia and Florida to collect tick samples monthly. Most of those plots had been subjected to long-term prescribed burning, a way to manage and control the growth of plant and animal species on a specific area of land.

Gleim, now a visiting assistant professor at Emory University’s Oxford College, found that prescribed burning over a long period of time effectively reduced tick populations and changed the landscape of the burned areas.

“At the end of the day, prescribed fire on a long-term basis decimated tick populations,” Gleim said. “It’s exciting because by reducing tick populations, the technique indicated that it was reducing risk of tick-borne disease in humans while also enhancing ecosystem health.”

Lone star ticks are known for transmitting a number of human pathogens that can cause disease. They include southern tick associated rash illness, known as STARI, and ehrlichiosis. Although ticks are present in Georgia and Florida year-round, they are a greater danger in the spring, summer and early fall when they are active.

Roy Berghaus, an epidemiologist in the UGA School of Veterinary Medicine, helped analyze the data on the ticks Gleim collected.

“Any of the burned sites they looked at had a dramatic reduction in the number of ticks they were able to collect,” Berghaus said. “Those tick sites that they couldn’t do prescribed burning on had dramatic increases compared to the other burning sites.”

At plots where there was no burning, tick counts were 10 times greater in the warm season than sites where prescribed burning occurred.

In total, over 47,000 ticks were collected among the 21 sites over two years. The most prominent of the ticks was the lone star tick, which is the most common tick in the Southeast.

However, prescribed burning may not be an ideal solution if the land cannot support it.

“There are some limitations when it comes to prescribed burning,” Berghaus said. “The land may be near a major highway, and it could cause an accident. In cases like that, there are some landscape and wildlife areas that need to take different measures.”

Aside from prescribed burning, there are ways individuals can keep safe from ticks year-round.

“The No. 1 thing is to perform prompt, careful full body checks after a visit into the forest,” Gleim said. “While preventative measures such as wearing insect repellents with DEET or permethrin are wise, chances are some ticks will get past these defenses. The good news for most tick-borne pathogens is that it takes a tick several hours to transmit a pathogen. If you can remove the tick in that time, you’ll be safe.”

The research was funded by the Centers for Disease Control and Prevention and UGA collaborative grant. Additional funding was provided by the Joseph W. Jones Ecological Research Center at Ichauway, the Warnell School of Forestry and Natural Resources and the Southeastern Cooperative Wildlife Disease Study in the UGA College of Veterinary Medicine.

Study co-authors include Mike Conner of the Joseph W. Jones Ecological Research Center, Michael Levin and Galina Zemtsova of the CDC and Michael Yabsley of Warnell and SCWDS at UGA. The study is available online at http://journals.plos.org/plosone/article?id=10.1371/journal.pone.0112174.