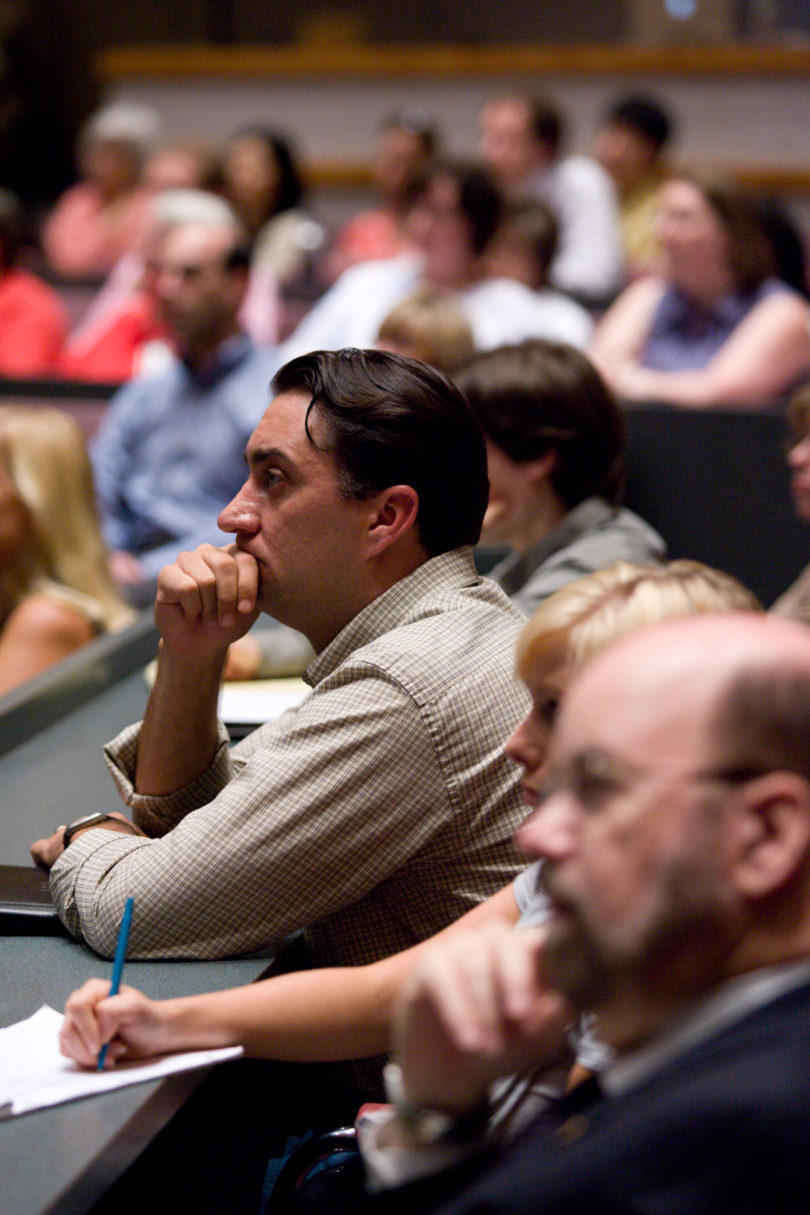 The university will undergo budget tightening during the 2009 fiscal year, but student instruction and employee jobs are not on the chopping block, President Michael F. Adams told a packed house Sept. 5 at the first of two scheduled budget forums.

“Our first commitment is to protect your jobs and instruction with no denigration to research and public service,” Adams said.

The forum was a chance for faculty, staff and students to ask questions about the implications of the budget cut. A second forum is scheduled from 10:30 a.m.-noon Sept. 17 at the Tate Theater.

A projected $1.6 billion shortfall in the state budget means the university will lose a portion of its state funding, with estimates calculated between 6 and 10 percent. That situation, while not official until the governor signs the next budget, could lead to fewer new hires and an upswing in tuition prices, Adams said. However, the cutbacks may be in remission by the time next year’s budget is considered.

“I’m going to focus on fiscal year ’09, which started on July 1 and runs through June 30 of next year. We will need to plan responsibly for fiscal year 2010, but there are a lot of factors that I am convinced are going to change between now and then,” he said.

Many of the uncertainties Adams discussed-such as whether state workers, including UGA employees, will receive their promised 2 percent salary increases-are out of the hands of UGA administrators. But that doesn’t mean that the university is completely at the mercy of the state government.

UGA already has begun to implement cost-saving measures, such as eliminating the 24-hour operation of the Miller Learning Center, canceling a number of subscriptions at the main library and reducing UGA police department overtime by 20 percent.

After a brief talk and presentation (talking points of which are available for download at www.uga.edu), Adams fielded questions from the audience.

While new hires now require the signature of a senior vice president, they’re not impossible to obtain, Adams said in response to a question about how departments can deal with retirements.

In response to a student’s question, Adams candidly said he expected and hoped for a tuition increase in the next year. While a 2006 policy locks in four-year tuition rates for students starting at the university, new classes will probably see an uptick, he said.

“It’s in your best interest that we not be so low that we can’t pay our faculty well. I think you will see in your time here some increase in tuition and fees,” Adams said.

The budget is tied to the ebb and flow of the federal and state economies, meaning that changes are possible. But, Adams promised to keep the university community in the dialogue about future modifications.