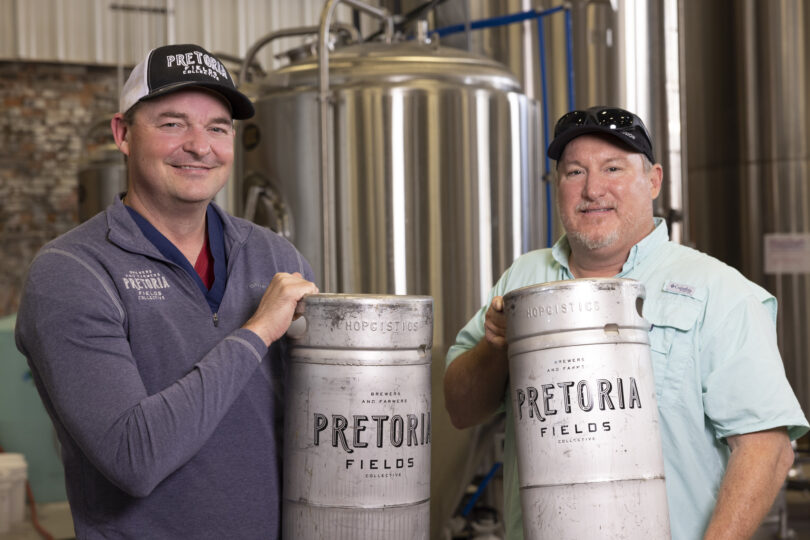 Before opening Pretoria Fields in 2017, Tripp Morgan (left), a surgeon, opened the Albany Vascular Specialist Center. Brewmaster Dee Moore (right) is a former financial adviser. He turned to brewing beer as a second career and he now runs the day-to-day operations at Pretoria. (Photo by Peter Frey/UGA)

Tripp Morgan arrives for an afternoon photo shoot wearing clothes that represent every aspect of his professional life. His Pretoria Fields fleece promotes the craft brewery that is his pride and joy. Morgan’s Pretoria Fields Collective cap highlights the local agricultural community that is centered on the 500-acre organic farm is where much of the brewery’s fruits and grains are harvested. Underneath are the scrubs he wears to his day job as a vascular surgeon in Albany, the largest city in southwest Georgia.

It’s a broad range of skills, responsibilities, and interests—among those interests is the University of Georgia.

“Like everyone else, I wish I was still there,” he laughs. Morgan credits UGA not only for the pharmacy degree that was first step in his medical career and he also notes that it was in Athens where he began home-brewing.

Morgan grew up on a farm near Camilla, and is a fifth-generation farmer. That knowledge of the land along with dedication to health informs his perspective.

“We practice regenerative agriculture, and regeneration is behind everything we do,” Morgan says Morgan. “We work to produce quality products and to keep the land healthy.

After he founded the Pretoria Fields farm, Morgan wanted to build a small brewery there. It was nothing too ambitious. The city of Albany learned about it, and encouraged Morgan to think bigger. In 2017, after some negotiation and the purchase of what had been a warehouse in the center of Albany’s historic district, the brewery opened.

Morgan says one of his smartest moves was hiring Dee Moore as brewmaster. That’s Moore’s title, anyway, but his responsibilities are far greater. The former financial adviser manages the day-to-day business and even supports sales reps on marketing calls.

Pretoria Fields was the first business to open on Albany’s historic Pine Ave. Several others quickly followed, but the COVID-19 pandemic quashed any momentum the district had, and only now is the city beginning to recover.

Albany was one of the hardest hit areas of the country, much less the state, and when beer production at Pretoria Fields shut down, Morgan and Moore credit a quick pivot to producing hand sanitizer for saving the business—and probably a lot of lives.

Pretoria Fields provided thousands of bottles sanitizer to local hospitals, schools, and other entities for free. They also partnered with a distributor that delivered it nationwide. Even today, bottles of hand sanitizer are sold next to the latest beers, and hand sanitizer-themed shirts hold a place of prominence on the merch wall.

Now that Pretoria Fields has fully reopened, it is looking toward the future and hoping to recapture some of the momentum the pandemic interrupted. Moore says they are about to complete purchase of a food truck to give customers and an additional option to visit, and he is currently brewing several new German-style beers that will be ready for an Oktoberfest celebration on Oct. 23.

“We’ll be closing off the street, they will be hay bales and bands,” Morgan says of the event, which will be a partnership with the city. “We are just looking forward to getting everyone back together again.”