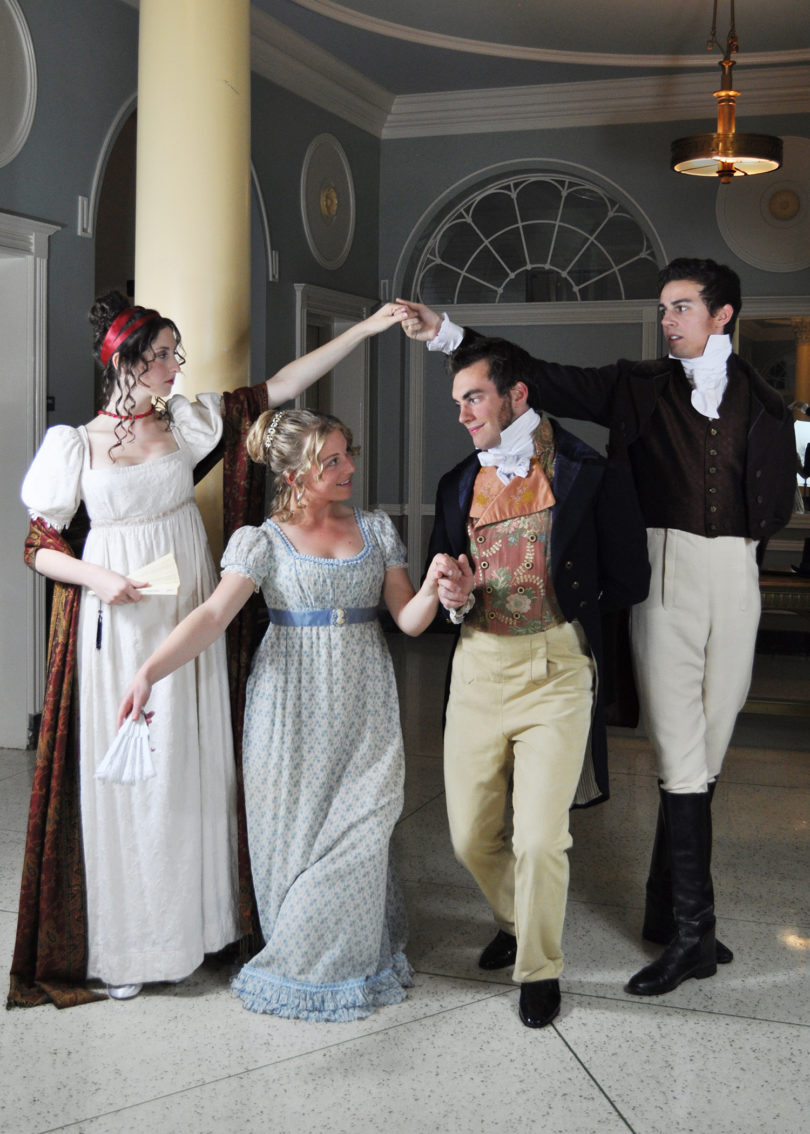 The cast of "Pride and Prejudice" includes

Athens, Ga. – The University of Georgia Theatre will celebrate the 200th anniversary of the Jane Austen classic “Pride and Prejudice” with a stage adaptation by Joseph Hanreddy and J.R. Sullivan directed by UGA’s George Contini. Performances will be Nov. 7, 8 and 13-16 at 8 p.m. with matinees Nov. 10 and 17 at 2:30 p.m. in the Fine Arts Theatre.

A panel discussion on “Lizzie Bennett Then and Now: Adapting Pride and Prejudice for Theatre, Film and the Web” will be held Oct. 29 at 5 p.m. in the Miller Learning Center.

Contini, an associate professor in the UGA department of theatre and film studies, describes the play as a Regency Classic “rom-com” and noted that Austen originally wanted to title the novel “First Impressions.”

“I’ve always felt that was the stronger title,” he said. “It’s one way this story still resonates with modern audiences. Vanity, hypocrisy, pride and prejudice all continue to play out in our lives as technology offers even more ways for us to wear masks in our interpersonal relationships and social settings.”

Contini sees another modern parallel in the story’s focus on the characters’ desire to marry the person they love.

“It’s an especially relevant theme in the light of recent court decisions broadening the ranks of those allowed access to the institution of marriage,” he said. “The struggle to balance love and practical matters in marriage also still resonates. And putting on airs to impress others is only amplified in our age of social media.”

Dance is a key element of the production, propelling characters through the narrative and reinforcing the production’s light and vibrant tone. The choreographer, Lily Herne, recently moved to Athens to work as program specialist for the UGA volleyball team after working extensively as a choreographer and director around the U.S. and Ireland. Her research on the period dances has helped the actors master them.

First produced at Milwaukee Repertory Theater, the stage version of “Pride and Prejudice” focuses on the transitory nature of both the period and the play’s characters.

“A vibrant and diverse young cast reminds us that, far from being stuffy, these characters are young people looking for love, fortune and status,” said David Saltz, head of the department of theatre and film studies. “There’s never been a more fitting time to encounter ‘Pride and Prejudice’ again or for the first time.”

For the panel discussion, speakers will include Contini; Alexandra Edwards, Emmy award winner for the Web series “The Lizzie Bennet Diaries” and a doctoral candidate in the department of English; Roxanne Eberle, the author of “Chastity and Transgression in Women’s Writing, 1792-1897” and an associate professor in the department of English; and Kayla Sklar, a mass media and marketing major with the Grady College of Journalism and Mass Communication’s New Media Institute.

The panel will discuss the interpretation, adaptation and rethinking of Jane Austen’s classic from novel and stage play to film and web series. It will address constant and relevant themes and the fuss about Mr. Darcy.

Tickets for the play are $16 for the general public and $12 for students. They can be purchased at http://www.drama.uga.edu/box-office, by phone at 706-542-4400, in person at the Performing Arts Center or Tate Student Center box offices or at the door before the show.

“Pride and Prejudice” is part of the annual UGA Spotlight on the Arts festival presented by the UGA Arts Council, of which the department of theatre and film studies is a participating unit. More than 60 events are scheduled during the nine-day festival in November. For more information, see http://arts.uga.edu/.