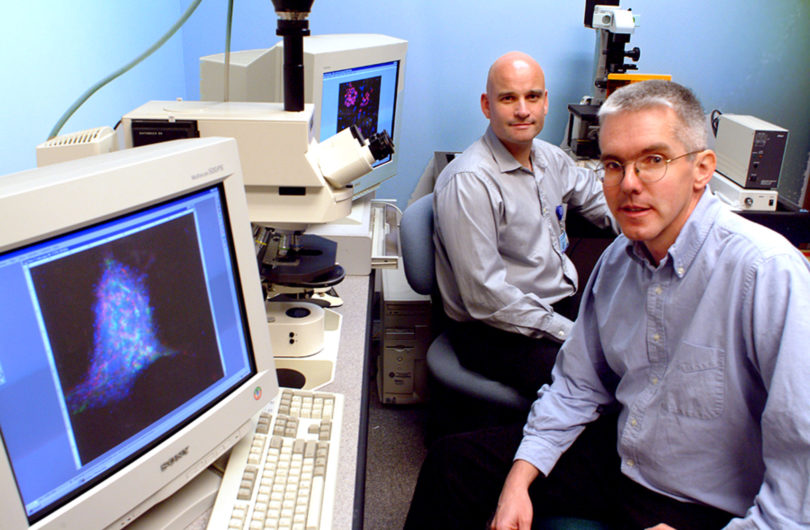 A lipid that helps destroy potentially harmful cells during brain development shows promise for improving the safety and efficacy of stem cell transplants, say researchers at the Medical College of Georgia and University of Georgia.

When embryonic stem cells are being coaxed toward becoming brain cells that could be transplanted, that lipid, ceramide, helps eliminate cells that could later form tumors called teratomas, the researchers reported in the Nov. 22 issue of the Journal of Cell Biology.

“The body has amazing mechanisms to eliminate cells that are no longer wanted and that if they remain will harm the body by developing into tissues that are not meant to be,” says Erhard Bieberich, MCG biochemist and the study’s lead author. “Our studies show this particular mechanism can help stem cells safely become the cells we want them to be.”

“This is another approach to controlling differentiation and getting the cell types that you want,” says Brian G. Condie, developmental neurobiologist at UGA and MCG and senior author on the paper.

While it’s the ability of embryonic stem cells to make all types of tissue-from brain cells to heart cells-that has scientists worldwide exploring their potential to treat devastating diseases, their pluripotency can also be harmful if uncontrolled, says Bieberich.

The researchers found that cells that inherited PAR-4 died when ­partnered with ceramide. Fortunately, the nestin-bearing cells are most likely to become neurons, while the PAR-4 cells, should they survive, could contribute to brain malformation.

In this new paper, the researchers took their findings in mouse embryonic stem cells and also looked at an approved line of human embryonic stem cells available through the National Institutes of Health Embryonic Stem Cell Registry. They found that, as the cells differentiated in culture, those containing PAR-4 had yet another bad dance card.

“We have discovered that particular cells derived from embryonic stem cells that express PAR-4 also cause teratoma formation,” says Bieberich. Teratomas are mostly benign growths comprised of multiple types of tissue, typically none of which belong in the tissue where they are found. They found PAR-4-expressing cells also express Oct-4, a transcription factor that controls a cell’s ability to develop into all three basic types of tissue: mesoderm, ectoderm and endoderm.

“If Oct-4 is expressed, the cells are still pluripotent, which is good if you want to grow all those kinds of embryonic layers,” says Bieberich. “But if you transplant them, you are at risk of forming teratomas.”

However, at least in the culture dish, when PAR-4’s lethal dance partner, ceramide, was added to the mix, cells expressing PAR-4 and Oct-4 again died before they could do harm.

The ceramide analogue, N-oleoyl serinol, or S18, also increased the proportion of nestin-containing cells in cell cultures and grafts.

Bieberich and Condie were quick to note that, in their studies, they intentionally left PAR-4- and ­Oct-4-bearing cells in the mix to see if they could eliminate them.

“There already are ways to grow stem cells, purify them in cell culture and get a pure population of stem cells that you can transplant,” says Condie.

“You want to make those cells differentiate into a particular cell type that is no longer able to form teratomas,” Bieberich says of this purification. “Having said that, that may not always be absolute.”

“What we are trying to do is find ways that can be combined with those methods currently being used to further reduce the chances of teratoma formation and make stem cells extremely safe,” Condie says. “This is something that you want to have zero doubt about.”

The next step is to look at an intact mouse embryo to see if the identical processes are at work. The work was funded by the NIH’s National Institute of Neurological Disorders and Stroke. Staff in Bieberich’s lab-Jeane Silva, Guanghu Wang and Kannan Krishnamurthy-contributed to the work and co-authored the publication.