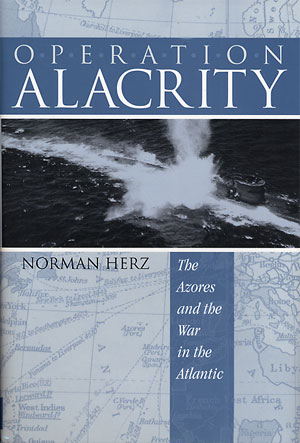 Operation Alacrity: The Azores and the War in the Atlantic
By Norman Herz
Naval Institute Press
$32.95

To win against German U-boats in World War II, the Allies had to protect their convoys in the Azores Gap. In 1943 they devised a plan to set up air bases on the Azores Islands. Norman Herz, UGA professor emeritus of geology, took part in the secret Allied operation, called Operation Alacrity, as a corporal with the U.S. Army Corps of Engineers.

In researching material for his book Operation Alacrity, Herz could not find the operation mentioned in official U.S. histories of World War II, but he discovered a treasure trove of documents among the files of the U.S. Joint Chiefs of Staff, the Combined U.S.-U.K. Chiefs of Staff and the State Department. Told here for the first time, the story is filled with diplomatic intrigue and double dealing and includes secret meetings between Franklin D. Roosevelt and Winston Churchill. It also provides an account of the prime minister’s efforts to justify landing in the Azores by referencing a 1373 treaty between Portugal and Britain.

A book signing for Operation Alacrity will be held March 3 at 4 p.m. in room 200A of the geology-geography building.