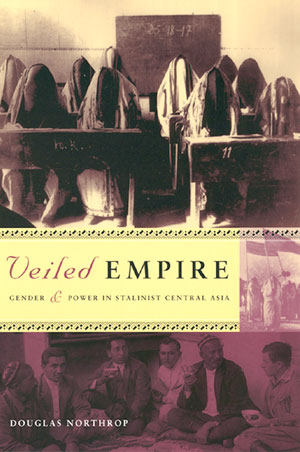 Veiled Empire reconstructs the turbulent history of a Soviet campaign that sought to end the seclusion of Muslim women. Written by Douglas Northrop, UGA assistant professor of history, the book draws on research in the archives of Russia and Uzbekistan. This campaign against the veil was, in North­rop’s view, emblematic of the larger Soviet attempt to bring the proletarian revolution to Muslim Central Asia, a region Soviets saw as primitive and backward. This unveiling campaign, however, took place in the context of a half-century of Russian colonization and the long-standing suspicion of rural Muslim peasants toward an urban, colonial state. Over the next ­quarter-century a bitter and often violent confrontation ensued, with battles being waged over practices of veiling and seclusion. Northrop’s book shows the fluidity of Central Asian cultural practices and the real limits that existed on Stalinist authority, even during the ostensibly totalitarian 1930s.