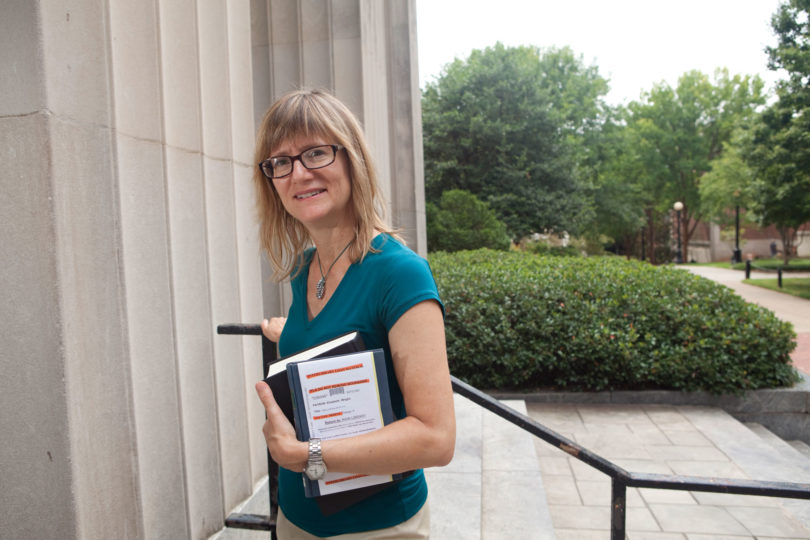 We’re all taught early in school some version of the story about Christopher Columbus stumbling onto the New World in 1492.

Beyond that, the average American’s knowledge of Spain’s imperial expansion probably ranges from a few names of conquistadors to practically nothing.

For Elizabeth Wright, an associate professor of Spanish in the Franklin College of Arts and Sciences, developing a broader understanding of Spanish imperialism as it played out both in Europe and the Americas through literature is a way to better understand America’s rich history.

Wright’s research and teaching focus on the writing of the early modern Spanish period (1492-1800).

“It’s important that we not limit our perspective to (Hernán) Cortés, Columbus, Ferdinand and Isabella-though they are fascinating and important-but also consider others,” said Wright, an Illinois native whose mother was born in Mexico.

As a Spanish literature professor, Wright teaches students to read, speak and think in the Spanish language at a deeper level, in part through their own research projects, or as she puts it, “to get them to think about how different people lived in earlier periods, to bring together voices that might not be talked about in the more famous literary texts you would study.”

One little known but compelling historical figure that Wright has focused on in her research is Juan Latino, a 16th-century former African slave who became a Latin professor and poet in Granada, Spain.

Wright researched Latino’s story extensively while working on a translation project funded by an Endowment for the Humanities grant.

The project, a collaboration between Wright, Sarah Spence, a Distinguished Research Professor of Classics in Franklin College, and former UGA student Andrew Lemon, resulted in a compilation and translation of poems inspired by the 1571 Battle of Lepanto, a monumental naval battle between a coalition of southern European Catholic states (Spain, Venice and Rome) and the Ottoman Empire.

Latino penned an epic poem ­inspired by the battle.

Wright said the battle, with a death toll of approximately 40,000, is ­considered by some to be a turning point in modern history and spawned countless commemorative poems.

The translation of these poems is now in the editing stages with the Harvard University Press.

With almost six years of working together, Spence praises Wright’s contributions to the project and describes the work with Lemon and Wright as “a happy collaboration.”

“She has this very detailed sense of what was going on at that point in history and this amazing skill with languages,” said Spence, who describes how the Spanish professor mastered Latin to the level of expertly translating the poems for the project.

Interest in the subjects that Wright researches and teaches seems particularly important as Hispanic tradition is playing a more prominent role in the U.S.

“The Hispanic heritage is our heritage as citizens of the U.S.,” Wright said.