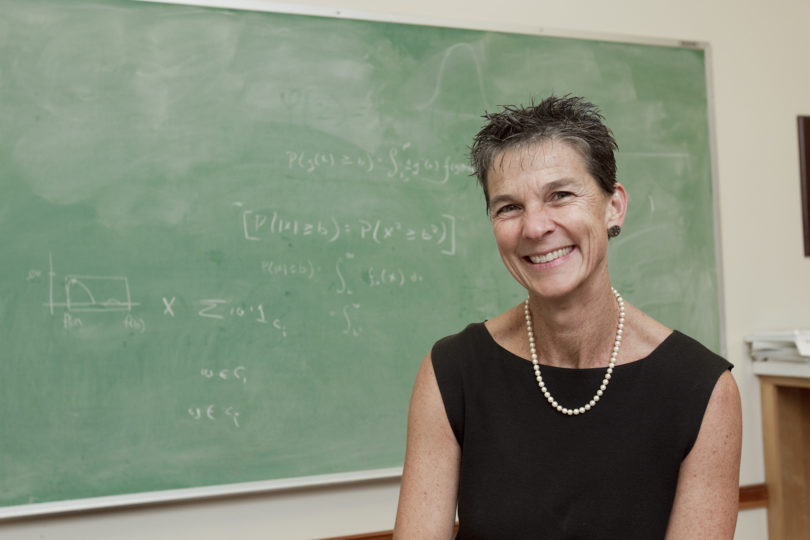 Christine Franklin has no illusions about why some of the students in her introductory statistics class are there: It’s a requirement for their majors.

Rather than feeling deflated by the prospect of teaching students who often aren’t in her class by choice, the senior lecturer and Lothar Tresp Honoratus Honors Professor in the Franklin College of Arts and Sciences said she’s energized by the challenge of helping students understand how statistical reasoning can be used in their majors and throughout their lives. The information age has foisted unprecedented amounts of data upon all of us, she explained, and statistics can help citizens make sense of many of today’s thorniest issues—from interpreting mammogram results to understanding global warming.

“One of the greatest joys for me is when students have those light bulb moments in class,” said Franklin, a Fellow of the American Statistical Association. “Sometimes I hear from my students, ‘I was really dreading this course, but this has actually turned out to be one of my favorite classes.’ Some of them come in not even wanting to take the first course, but then make the decision to take the second course. And some of them actually become statistics minors or majors.”

Franklin’s work to create a more statistically literate population extends beyond campus. As an adviser to the Georgia Department of Education, she has helped shape curricula for the state’s public school children. The textbook she co-authored, Statistics: The Art and Science of Learning from Data, is used in college and high school classes around the nation.

Franklin has devoted her time off campus to education, as well. She has served on the Oconee County School Board, helped the state and its teachers transition to the Common Core standards that have been adopted by 45 states and has developed K-12 statistics standards nationally.

Although Franklin has devoted her career to statistics education, her initial plan as an undergraduate at the University of North Carolina at Greensboro was to pursue a career in law. The political science major found that the elegant and clear solutions math problems provided were a refreshing break from the muddy nuances of politics and law, and added math as a second major. Enrolling in the master’s program in statistics at UNC-Greensboro was one of the best decisions she’s made, she said, but her family wasn’t so sure.

“You want to give up law to do what?” she recalls them asking.

One of Franklin’s many roles on campus is to advise students, and she often shares this story with undergraduates who are unsure of their career path.

“Discovery is part of what being an undergraduate is about,” she tells them.

Franklin’s interest in educational policy began while she was a lecturer at the University of Florida. Her students dutifully memorized formulas—and forgot nearly everything after the final exam. To give the students the time they needed to absorb the big picture concepts of statistics, she joined a nascent movement to move statistics into K-12 education and continued those efforts when she came to UGA in 1989. The movement eventually led to the creation of AP Statistics, for which Franklin spent several years as the nation’s lead faculty member overseeing the construction and grading of the exam.

For Franklin, the processes of teaching and learning have always been interrelated. “It’s all connected, and every link is important,” she said.