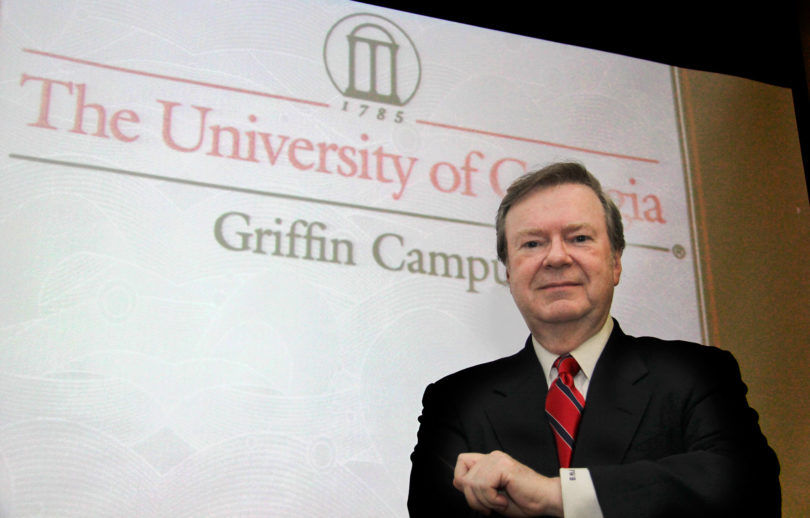 Prof teaches students to be better consumers of information

Perry Buffington, a psychology lecturer teaching at UGA’s Griffin campus, offers a piece of vocational advice to his students taken from his own experience: Plan on having three careers.

“As you hit a milestone in your life, you’ve got to keep things interesting and active to keep your brain alert,” said Buffington, a trained psychopharmacologist and faculty member for UGA-Griffin’s new interdisciplinary studies with psychology concentration program.

Over the years, Buffington, or “Dr. Buff” as he is known from his syndicated columns, radio shows and TV spots, has found his calling as a practicing therapist and media personality. Both jobs inform his current one-teaching.

Buffington now is trying to make students better consumers of medication and urging professional psychologists and other health providers taking continuing education courses to be thoughtful about prescribing drugs.

“My No. 1 goal in my classes: Psychologists must learn to be more proactive in patient safety,” he said. “I think medicine has become way too routine.”

Buffington encourages his students to understand the benefits and side ­effects of drugs.

While Buffington’s focus on psychology has remained steady throughout his career, his résumé has been atypical for someone with a doctoral degree in counseling psychology.

After a stint as a therapist, Buffington started writing columns for Sky, Delta Air Lines’ inflight magazine. That led to opportunities to write other columns in which he took “lofty psychological stuff,” as he put it, “and turned it into something people can understand.”

Buffington eventually would appear on local TV news stations in Atlanta and Jacksonville, Fla., to talk about career-oriented psychology. In 1996, he penned the best-seller Cheap Psychological Tricks: What to Do When Hard Work, Honesty, and Perseverance Fail.

During that time, Buffington also spent most semesters as an adjunct professor teaching psychology courses at colleges in Georgia and Florida.

His career took another turn when he chose to pursue a post-doctoral master’s degree in the science of psychopharmacology, the study of drugs affecting the brain and spinal cord.

After completing the work to become a licensed-eligible psychopharmacologist, Buffington began teaching at UGA-Griffin seven years ago as an adjunct professor. This fall, Buffington will be teaching as a faculty lecturer.

Growing up in Zebulon, about 12 miles south of Griffin, Buffington is a champion of the Griffin campus.

“I don’t think people realize the potential value of this campus to the community and the state,” he said.

Buffington’s style as an educator borrows from the “Walt Disney school of teaching,” he said.

“A good instructor is as much entertainer as he is teacher,” he said. “If I can poke fun, I do. If I can make them laugh, I will. I think class should be fun.”

His focus, as it was in his media days, is getting students to understand how concepts relate to everyday life.