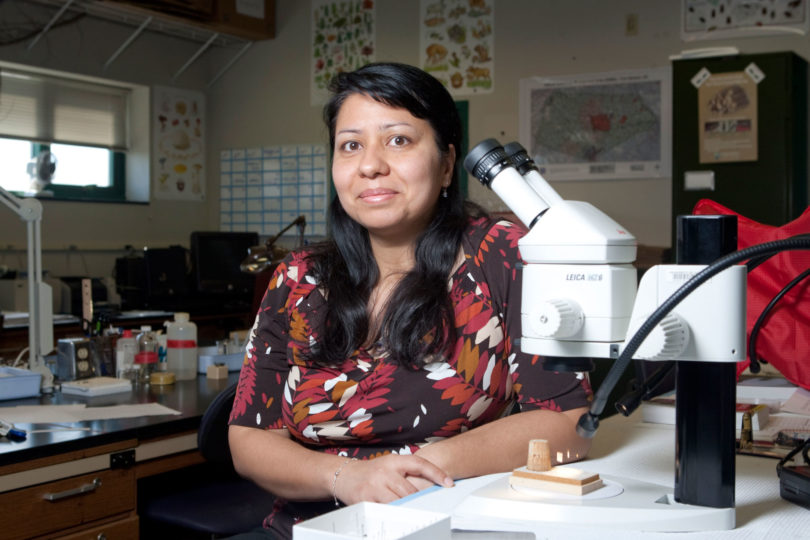 Kamal Gandhi has been interested in insects and their impact on humans since she was a 13-year-old at a nature camp in India.

She has spent the past 15 years studying how insect species affect the health of forest ecosystems, tracking the patterns of how non-native bugs settle in and fundamentally alter, fauna, wildlife, native insects and tree health. It’s amazing what something so small can do, she said.

Gandhi, who joined the Warnell School of Forestry and Natural Resources faculty in 2008, came here with husband, Nathaniel LaTrace, and toddler daughter, Aleiah.

A native of India, Gandhi said she first became interested in the dynamics of insect biology as a child.

“When I was 13 years old, I attended a World Wildlife Fund Nature Camp in a southern forest in India,” she said. “For the first time, I saw and experienced the immense biodiversity and complexity of insects, and also the obvious human impacts, even within a reserve.”

This, Gandhi said, fueled her interest to look for long-term scientific solutions related to forest health issues, such as loss of biodiversity and invasion of habitats by exotic insects.

When Gandhi came to UGA, she filled a void in Georgia with her specialization in forest protection and health. She’s been teaching forest ecology and instructing classes in her area of expertise. But her lab also has been conducting cutting-edge research on how insect populations are affecting forest health, focusing particularly on Southeastern forestlands. She oversees several research coordinators, graduate students and a postdoctoral researcher who are zeroing in on three specific areas of forest health: Invasion dynamics of non-native forest insects, ecology and management of epidemics of native forest insects and the interactions between forest disturbances and insects.

Her team, she said, works to broadly link organisms, communities and populations with their research. As the world becomes more connected, the risk of invasive species spreading grows, according to Gandhi. The number of invasive insects harming the U.S. landscape is skyrocketing, and with it comes incredible economic damage. Her goal is to achieve forest heath and protection, particularly for Southeastern U.S. forest stands.

Gandhi already has been part of a team that has uncovered an invasion of exotic ambrosia beetles. Gandhi joined the Georgia Forestry Commission’s 2009 Cooperative Agricultural Pest Survey and found that found a number of the camphor shot borer in six counties.

Gandhi doesn’t stop at research, however. She takes a hands-on approach to teaching, believing that students learn best through live examples and that a college classroom should mimic real life where problem-solving skills are essential.

So she wants her students to develop clear communication and problem-solving skills. Her students thrive on her open door policy. Working with students, and watching them grow as scientists is the best part of this job, according to Gandhi. In addition to being a productive and focused researcher, she encourages students to lead balanced lives by spending adequate time with their families and working out. Her mentoring goal is that by the time these students graduate, they become excellent scientists with deep knowledge about forest entomology, capable of making sound decisions related to forest health, are well-rounded and an important part of today’s society