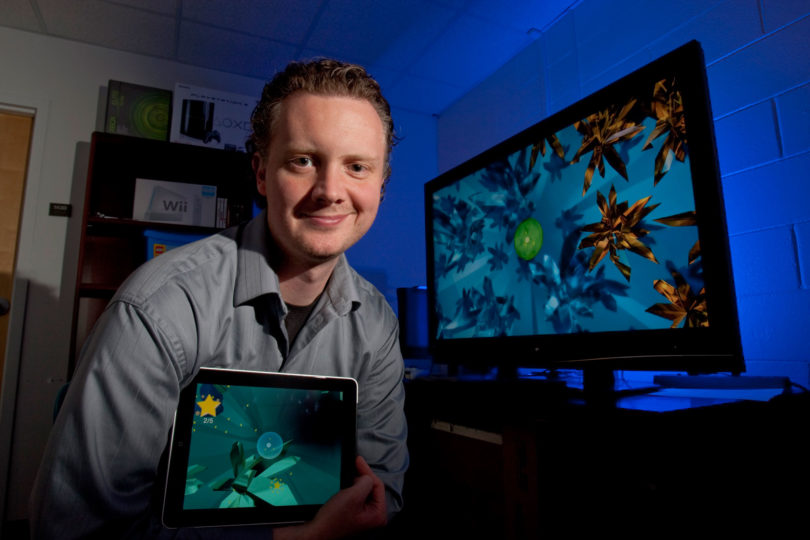 Casey O’Donnell sure knows how to take the fun out of a video game.

Talk to him about the addictive “Angry Birds,” and he’ll tell you that it’s actually a physics puzzler. He likewise dissects the popular “Plants vs. Zombies” as a “really good implementation of a fairly standard game mechanic called tower defense.”

You soon realize that O’Donnell looks at video games through a different lens. The assistant professor of telecommunications has worked as a software engineer and project manager both in and out of the game industry.

Before joining the Grady College of Journalism and Mass Communication in 2008, he did satellite visualization and 3-D sound system work, spent time at game studios in India and worked in design automation. In between, he started graduate school in computer science-a venture that lasted all of two weeks.

“September 11th happened during that time,” the Iowa native recalled. “A lot of people looked at their lives and said ‘Am I really doing what I want to do?’ I realized it wasn’t a good fit for me, so I left.”

Two years later he found the perfect fit when he was accepted, with full support, into the graduate science and technology studies program at New York’s Rensselaer Polytechnic Institute.

“These interdisciplinary, hybrid programs take a social scientific approach to looking at how scientists and engineers do what they do,” said O’Donnell. “The game industry and the people who work in it became my object of study.”

At UGA, his research focuses on the history and ethnography of game development. An anthropologist at heart, he looks at what constrains and enables the creative practice of video game development, including power dynamics that occur in organizations and informal groups.

O’Donnell is active in the International and Georgia Game Developers Association.

“This outreach keeps me in touch with those who can help with my research,” he said. “I truly believe that the best teaching happens where research and service intersect.”

O’Donnell teaches classes both in Grady’s department of telecommunications and UGA’s New Media Institute. A game lab he set up for his “Introduction to Game Design” class allows students to play games with an eye towards dissecting how they work and developing literacy around them.

Using games to improve learning is something about which he is passionate. A game he developed called “Osy” is currently awaiting app store approval. Aimed at high school students, “Osy” deals with the biological process of osmosis and is part of a five-year partnership project between UGA, Augusta State University, high school science teachers and the Biological Science Curriculum Study organization.

In his spare time, playing video games is pretty low on his list.

“I may play a game every couple of weeks,” he said. “I can’t remember that last time I played a game for longer than 20 minutes. For me, the process of dissecting it is what’s fun.”