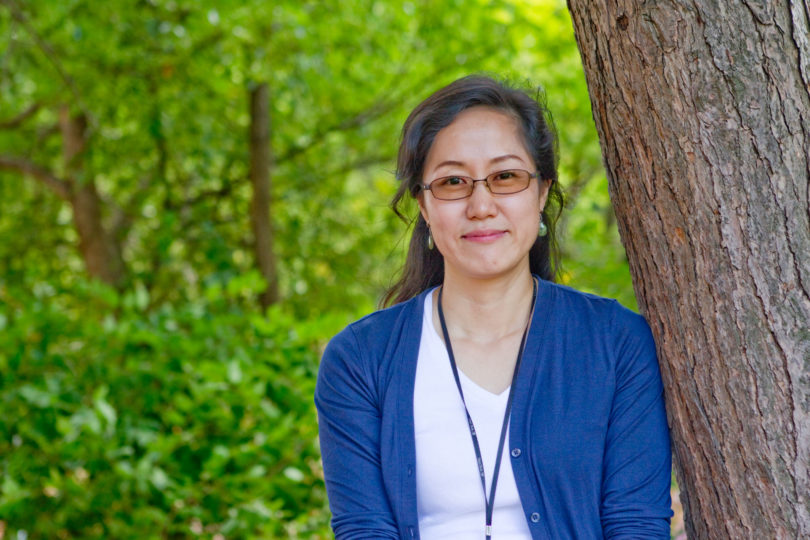 Jung Sun Lee works to help understand food insecurity in older adults. Her research focuses on older adults who don’t have enough food and possible solutions. She even helps with the Campus Kitchen Project

Since joining the College of Family and Consumer Sciences in 2006, Jung Sun Lee has developed new ways of measuring food insecurity among older adults that are now being adopted and used by the state. Lee also has expanded her research, teaching and outreach programs to establish even more ways of helping older adults who do not have enough to eat.

Lee’s research on the Georgia ­Advanced Performance Outcomes ­Measures Project (POMP) demonstrated that by assessing those who were on waiting lists for meal programs such as Meals on Wheels or lunches served at senior centers, important information could be obtained.

In Georgia, for example, Lee discovered that up to 59 percent of those on waiting lists for home-delivered meals were food-insecure. That is, they had limited or uncertain ability to acquire sufficient quantities of nutritious food; they had to dedicate a large percentage of their income to food; or they had to choose between an adequate food supply and other necessities such as medicine or housing.

“No other program or state had collected this type of data previously as part of an administrative program evaluation,” said Lee, an assistant professor of foods and nutrition. “We found that our ways of measuring food insecurity were easily implemented and provided a reliable measure of food insecurity that can detect the benefit of meal program participation as little as four months. Now, we have expanded this research and, through the state aging client information database system, are asking older Georgians who request services about food insecurity.”

In addition to the POMP data, Lee also has obtained Medicare data and merged the two.

“With these complementary data-sets, we can actually estimate the dollar amount food insecure older individuals spend on medication and medical care,” she said. “By identifying unique health care usage patterns, such as whether a food insecure individual fills a prescription on time, we can begin to determine how food insecurity may impact health issues.”

Lee also found that many of those on waiting lists for meal programs may be eligible for programs such as food stamps, but have not applied. As part of a follow-up project, food stamp advocates are being trained to target older adults and encourage them to apply for aid, she said.

In a separate project, Lee and her graduate student conducted interviews with residents of the Athens Housing Authority to better understand how they perceive their “food environment,” which she describes as where residents buy or get their groceries, how often they shop for food and the challenges they face.

“In Athens, it can be difficult to get to a grocery store if you don’t own a car,” she said. “If you have to travel by bus or taxi to buy food, you might buy different items or different amounts of food than you would otherwise.”

One of her interesting research findings has been the lack of understanding many housing authority residents have about the local farmers markets.

“Many of the residents either didn’t know about the farmers markets, or they were interested in going, but thought it was too expensive,” she said. “However, the vendors at the farmers market did a pilot project that doubled the value of food stamps which could make it affordable to many low-income people who want to buy fresh vegetables.”

In addition to her many research projects—and her desire to see changes that benefit older adults who are food insecure—Lee works with UGA faculty and students to teach young children about food and nutrition. She is part of a team that has developed a service-learning course where students travel to five elementary schools to teach students about gardening, food and nutrition.

Finally, Lee is a nutrition adviser to the Campus Kitchen Project at UGA. Although new to UGA, Campus Kitchen has been around for a decade and is currently found on 26 campuses across the nation. At UGA, Campus Kitchen delivers excess food collected from fraternity and sorority houses, local restaurants, UGArden’s student garden and the Food Bank of Northeast Georgia to grandparents who are raising their grandchildren.

In all of her projects, Lee emphasizes the importance of using strong research methodology.

“One of the ways I can contribute to improving food security is through research,” Lee said. “I like gathering the data using a rigorous research design and determining how we can make changes in food and nutrition programs and policy that will help people throughout the nation.”