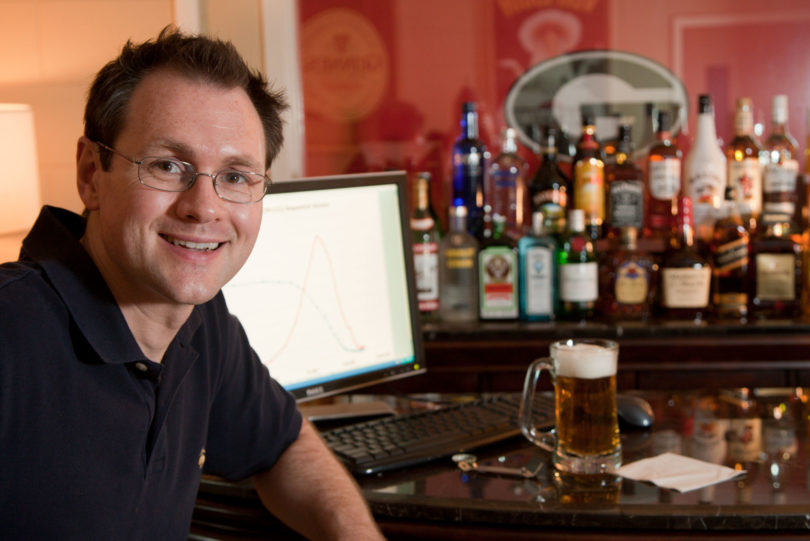 Although choosing to do something because the perceived benefit outweighs the financial cost is something people do daily, little is known about what happens in the brain when a person makes these kinds of decisions. Studying how these cost-benefit decisions are made when choosing to consume alcohol, James MacKillop, an associate professor of psychology, identified distinct profiles of brain activity that are present when making these decisions.

“We were interested in understanding how the brain makes decisions about drinking alcohol. Particularly, we wanted to clarify how the brain weighs the pros and cons of drinking,” said MacKillop, who directs the Experimental and Clinical Psychopharmacology Laboratory in the Franklin College of Arts and Sciences.

The study combined functional magnetic resonance imaging and a bar laboratory alcohol procedure to see how the cost of alcohol affected people’s preferences. The study group included 24 men, age 21-31, who were heavy drinkers. Participants were given a $15 bar tab and then were asked to make decisions in the fMRI scanner about how many drinks they would choose at varying prices, from very low to very high. Their choices translated into real drinks, at most eight, that they received in the bar immediately after the scan. Any money not spent on drinks was theirs to keep.

The study applied a neuroeconomic approach, which integrates concepts and methods from psychology, economics and cognitive neuroscience to understand how the brain makes decisions. In this study, participants’ cost-benefit decisions were categorized into those in which drinking was perceived to have all benefit and no cost, to have both benefits and costs, and to have all costs and no benefits. In doing so, MacKillop could dissect the neural mechanisms responsible for different types of cost-benefit decision-making.

When participants decided to drink in general, activation was seen in several areas of the cerebral cortex, such as the prefrontal and parietal cortices. However, when the decision to drink was affected by the cost of alcohol, activation involved frontostriatal regions, which are important for the interplay between deliberation and reward value, suggesting suppression resulting from greater cognitive load. This is the first study of its kind to examine cost-benefit decision-making for alcohol and was the first to apply a framework from economics, called demand curve analysis, to understanding cost-benefit decision-making.

“The brain activity was most differentially active during the suppressed consumption choices, suggesting that participants were experiencing the most conflict,” MacKillop said. “We had speculated during the design of the study that the choices not to drink at all might require the most cognitive effort, but that didn’t seem to be the case. Once people decided that the cost of drinking was too high, they didn’t appear to experience a great deal of conflict in terms of the associated brain activity.”

These conflicted decisions appeared to be represented by activity in the anterior insula, which has been linked in previous addiction studies to the motivational circuitry of the brain. Not only encoding how much people crave or value drugs, this portion of the brain is believed to be responsible for processing interceptive experiences, a person’s visceral physiological responses.

“It was interesting that the insula was sensitive to escalating alcohol costs especially when the costs of drinking outweighed the benefits,” MacKillop said. “That means this could be the region of the brain at the intersection of how our rational and irrational systems work with one another. In general, we saw the choices associated with differential brain activity were those choices in the middle, where people were making choices that reflect the ambivalence between cost and benefits. Where we saw that tension, we saw the most brain activity.”