The three-year, $2.7-million project is funded by the U.S. Department of Energy

Trees in the summer get all the attention.

Leafy green trees are symbols of growth and prosperity. Their leaves bring valuable shade, and as they change color people make extra effort to see the show. Once they drop, it’s easy to assume that the plants are “asleep” until springtime arrives.

But there is a lot going on under the bark, says a University of Georgia researcher, even during winter dormancy. Now, a new federally funded project will take a closer look at how tree cells—especially the wood-forming cells known as xylem—function during colder months and lay the groundwork for greater understanding of tree genetics and productivity. 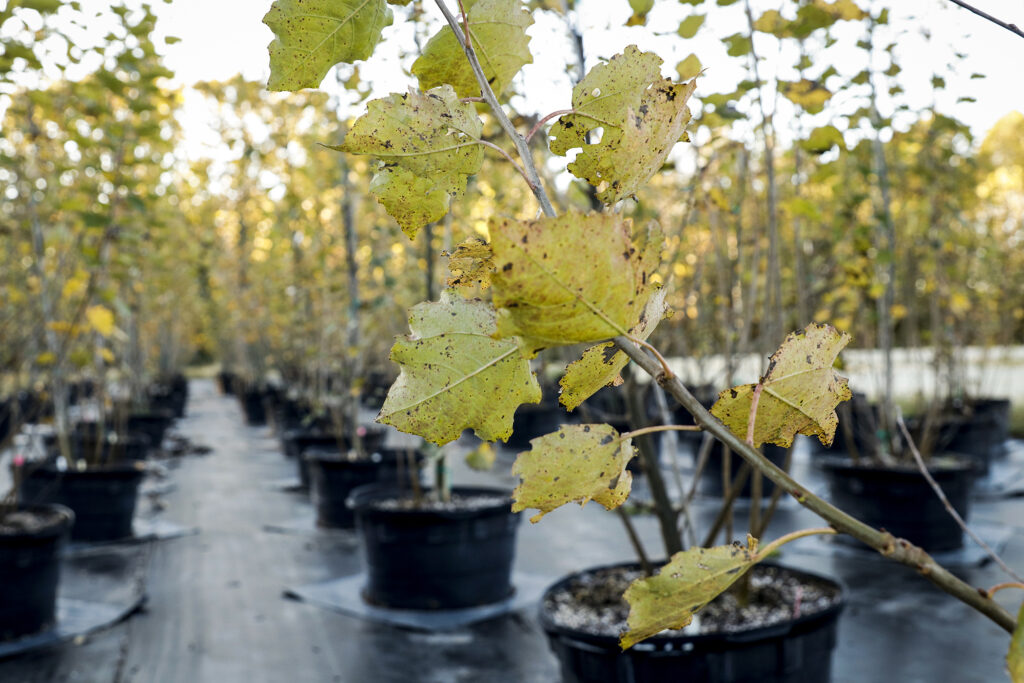 “We know trees go dormant in the winter, and we just forget about it. But genes are still there, doing their job—proteins and metabolism are still working,” said C.J. Tsai, the Winfred N. “Hank” Haynes Professor at the UGA Warnell School of Forestry and Natural Resources and an eminent scholar with the Georgia Research Alliance. She found only one paper, published 20 years ago, that looked at how tree xylem cells functioned in winter. “So we thought, this is an opportunity—it’s a knowledge gap.”

The three-year, $2.7-million project is funded by the U.S. Department of Energy.

The question of how trees function during dormant months came up as Tsai’s research group observed greenhouse-based experiments over the years. Even under manufactured conditions, they realized trees would still grow slower during winter and have slightly different sugar profiles. 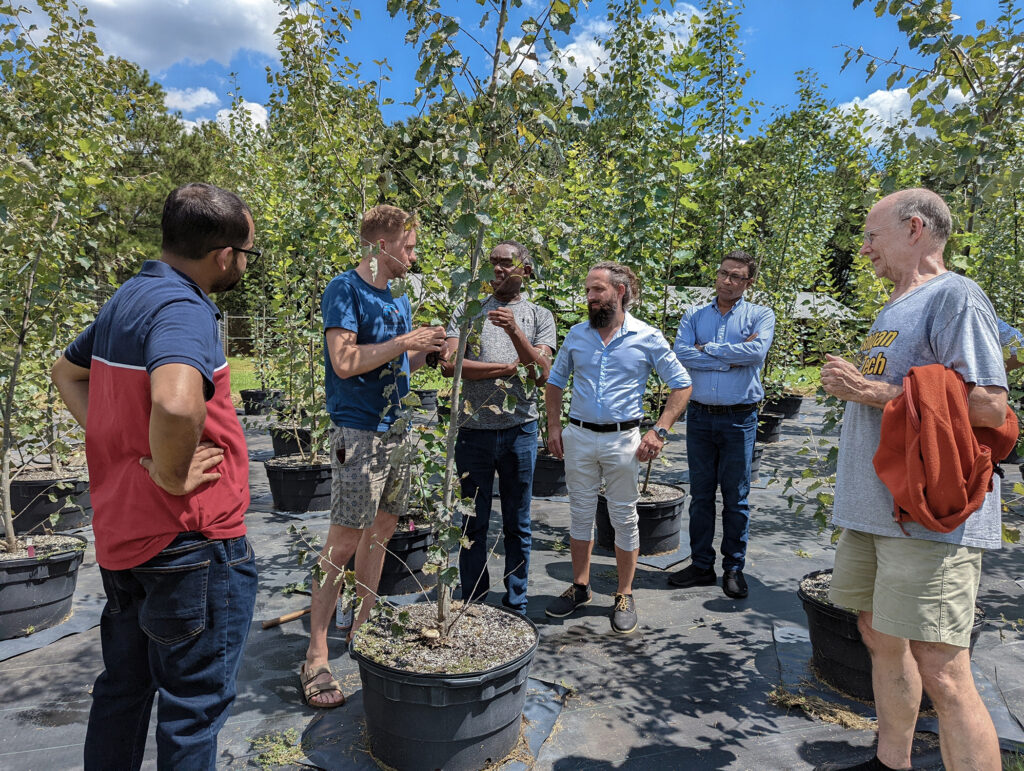 The lab team gathers at the site where trees are being studied. (Photo by C.J Tsai)

“We suspect the sugar profiles help protect the trees during the winter,” said Scott Harding, a senior research scientist at Warnell and team member who first noticed the differences in growth.

In Tsai’s lab, which focuses on tree genomics and biotechnology, the team has been characterizing a gene that controls distribution of sucrose produced from trees’ photosynthetic process (to power growth and development). Using poplar trees, the team grew a set of saplings without this gene alongside ones with it. The saplings were started in a greenhouse under controlled conditions, and all grew similarly.

Working with her graduate student Trevor Tuma, the team decided to conduct a small field trial.

“It was really striking that we did not have a very obvious phenotype in the greenhouse, but after a few months outside, we saw a large difference,” she said. “By mid-November, all the trees with the mutation had dropped their leaves, and this past spring, their leaves didn’t come out until maybe April. So you can imagine if they drop their leaves earlier and their leaves flush later, it may be because the trees’ carbohydrate reserve is just not as plentiful because of the mutation.” 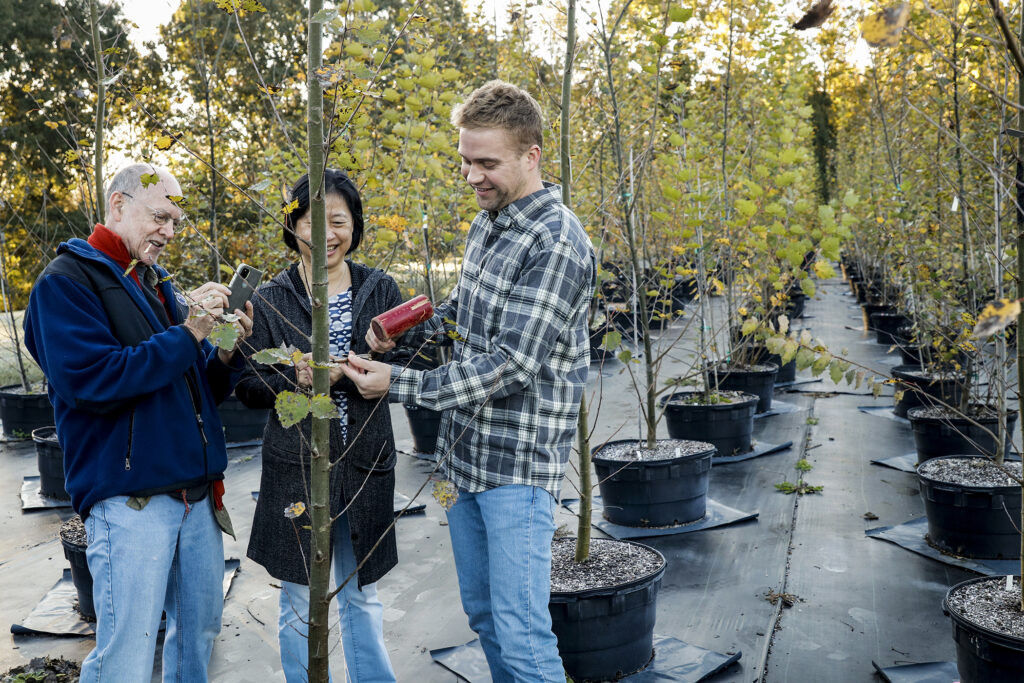 Trevor Tuma, right, a doctoral student in the University of Georgia Warnell School of Forestry and Natural Resources, checks the status of a poplar tree on the UGA campus. He is monitoring the growth and cellular changes of the trees during the winter as part of a federally funded project led by professor C.J. Tsai, center. Scott Harding, a senior research scientist with UGA’s department of genetics, is also working on the project. (Photo by Kristen Morales)

The project’s goal is to compare summer and winter gene profiles to identify which parts of a poplar tree’s genome is used in the winter months. The team will then use CRISPR gene editing to mutate winter-biased genes in order to learn their functions. The pilot field study shows that it is possible to observe seasonal growth differences in trees within just a few months rather than waiting for years.

The project is also leveraging a long-term research program, the Center for Bioenergy Innovation, also funded by the U.S. Department of Energy, to test different types of poplar trees. Tsai is collaborating with Wellington Muchero and Priya Ranjan at the Oak Ridge National Laboratory in Tennessee, where they have collected 1,000 poplar trees from across the country to grow in several common gardens in Washington and California to gain additional insights. The genes from these trees—and their reactions to the seasons—will help the researchers further understand the roles genes play in keeping trees protected during winter months.

“It’s really a gold mine for us to find out what other genes are ‘awake’ during winter and what their functions are,” said Tsai.