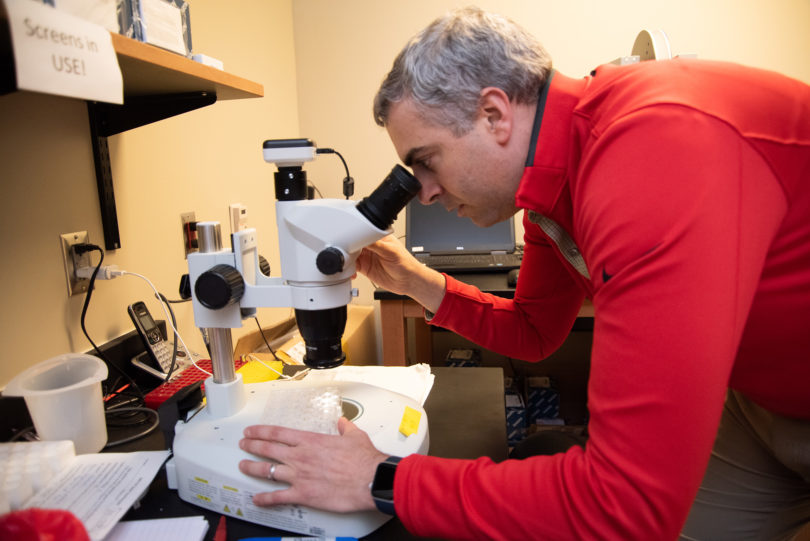 A team of researchers at the University of Georgia has successfully demonstrated that a set of drug-like small molecules can block the activity of a key SARS-CoV-2 protein—providing a promising path for new COVID-19 therapeutics.

Led by Scott Pegan, director of UGA’s Center for Drug Discovery, the team was the first to evaluate the SARS-CoV-2 protein PLpro, known to be essential in other coronaviruses for both its replication and its ability to suppress host immune function.

“The PLpro from SARS-CoV-2 behaved differently than its predecessor that caused the SARS outbreak in 2003. Specifically, our data suggests that the SARS-CoV-2 PLpro is less effective at its immune suppression roles,” said Pegan, professor of pharmaceutical and biomedical sciences in the College of Pharmacy. “This may be one of the underlying reasons why the current virus is not as fatal as the virus from the 2003 outbreak.”

From an evolutionary standpoint, it’s not good for a virus to be fatal for the host, and SARS in 2003 was particularly lethal, according to Pegan.

“The COVID-19 virus infects, but people don’t run a fever before they are contagious, so  there’s a lot of focus on how virulence factors like PLpro have been modified by nature to give the virus a better chance, from its perspective, to coexist with us,” he said. “Obviously we would not like for it to coexist, but COVID-19 seems to have solved the Goldilocks paradox of being in the right place at the right time and with the right infection level.”

Pegan collaborated with UGA scientists David Crich, Ralph Tripp and Brian Cummings to explore inhibitors designed to knock out PLpro and stop replication of the virus. They began with a series of compounds that were discovered 12 years ago and shown to be effective against SARS, but development was cut short since SARS had not reappeared.

“Obviously now we see the current coronavirus is probably going to be with us for a while—if not this one, then probably other types of coronaviruses,” Pegan said. “These compounds are a good starting point for therapeutic development. They have all the properties you would typically want to find in a drug, and they have a history of not being considered toxic.”

These compounds, naphthalene-based PLpro inhibitors, are shown to be effective at halting SARS-CoV-2 PLpro activity as well as replication. They offer a potential rapid development path to generating PLpro-targeted therapeutics for use against SARS-CoV-2.

“The kind of small molecules that we’re developing are some of the first that are specifically designed for this coronavirus protease,” Pegan said. “Up till now, most therapeutic work against SARS has targeted another virulence factor, C3Lpro. This is a great start with a different target. Our hope is that we can turn this into a starting point for creating a drug that we can get in front of the Food and Drug Administration.”

Four UGA labs, including students, brought their expertise to the project. Pegan’s lab used modeling techniques to locate the differences between PLpro in the 2003 outbreak and the current outbreak, revealing the comparative weakness of the SARS-CoV-2 PLpro and suggesting potential inhibitors for testing.

Medicinal chemist David Crich, professor and Georgia Research Alliance and David Chu Eminent Scholar in Drug Design, provided guidance on understanding the attributes of the inhibitors and is working to synthesize new compounds with improved properties.

Testing of compounds against the virus was led by Ralph Tripp, an expert in respiratory viruses and related diseases who is Georgia Research Alliance Eminent Scholar of Vaccine and Therapeutic Studies and professor of infectious diseases in the College of Veterinary Medicine.

Brian Cummings, professor and head of pharmaceutical and biomedical sciences, covered toxicology, ensuring that the compounds tested killed their intended targets without causing toxic effects for the host.