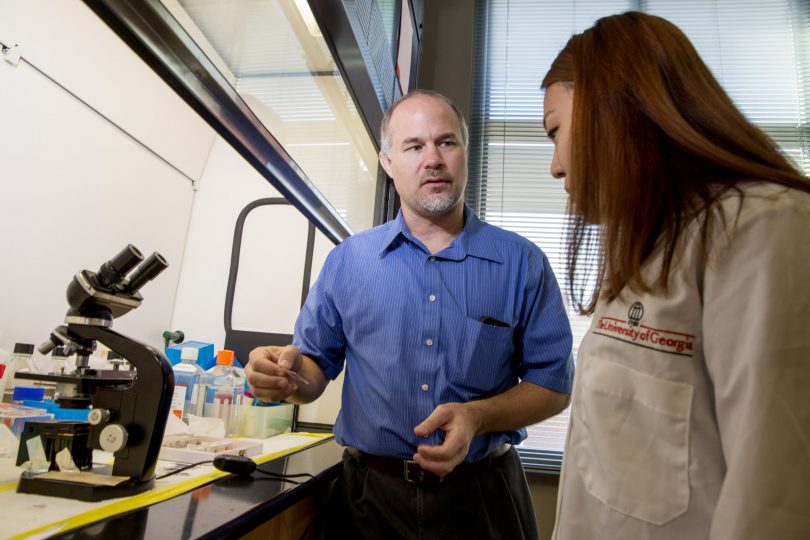 Dr. Brian Cummings interacts with a student in a laboratory. (Photo by Dorothy Kozlowski/UGA)

Prostate cancer is the second most common cancer among men, according to the American Cancer Society. It’s also one of the trickiest cancers to diagnose and treat.

But new research from the University of Georgia has identified a protein that appears to prevent the cancer from spreading to and colonizing the bone, providing a new target for future therapeutics.

“Unfortunately, prostate cancer that has spread to the bone is very aggressive, often lethal and very difficult to treat,” said Brian Cummings, corresponding author of the study and head of the College of Pharmacy’s pharmaceutical and biomedical sciences department. “Even in cases of successful treatment, the patient’s quality of life is severely lessened due to bone loss.”

Prostate cancer that hasn’t spread beyond nearby organs has nearly a 100% survival rate, meaning almost all of these patients will live at least another five or more years after their initial diagnosis and treatment. But for men whose cancer has spread to other organs or the bone, that five-year survival rate plummets to 30%, according to the American Cancer Society. In the U.S., about one in every eight men will be diagnosed with prostate cancer and more than 34,000 men die each year from the disease.

The new study, published by Scientific Reports, focused on cancer-associated fibroblasts, which are the most abundant type of cell in tumors and are responsible for cancer growth and spread. The researchers found that knocking out a specific protein, called glypican-1, could prevent tumor cells from spreading into nearby bone.

The study supports a previous report from Cummings’ laboratory suggesting that this protein may prevent tumor growth. The researchers found that the protein doesn’t alter the cancer cells themselves. Instead it affects a group of neighboring cells called fibroblasts.

Fibroblasts are cells that help make up connective tissues in people and animals. But fibroblasts can also be present in cancerous tumors, where they facilitate cancer growth and spread.

This protein appears to stop the ability of cancer cells to change their environment, which decreases the cancer’s aggressiveness.” —Brian Cummings, professor and department head of Pharmaceutical and Biomedical Sciences

Without the protein, the prostate cancer cells had problems transforming the fibroblast.

The study was the first to demonstrate such a role for glypican-1 and suggests that this protein may have the same effect on tumor growth in people.

“Part of the significance of this study is that it demonstrates how cancer cells are able to change their environment in ways to facilitate their own growth,” Cummings said. “Prostate cancer cells alter their environment so that they can colonize bone. This study identifies a role for a protein that appears to inhibit the harmful changes that prostate cancer makes to the bone.”

“This protein appears to stop the ability of cancer cells to change their environment, which decreases the cancer’s aggressiveness. The fact that this protein is found in the bone, where many aggressive prostate cancer cells reside, further increases the potential impact of this work.”