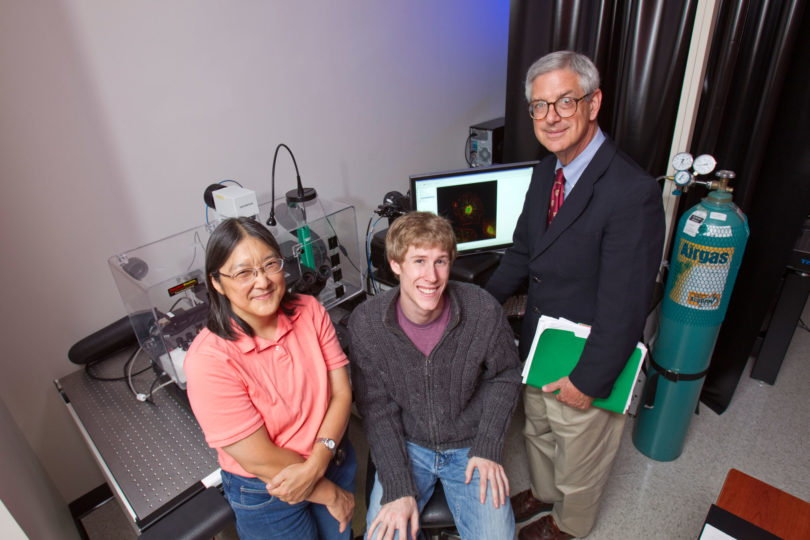 A hundred years after Alzheimer’s was discovered—and many millions of suffering patients and families later—scientists still don’t know what these structures do. They do know, thanks to new research from UGA, that Hirano bodies may have a protective role in the brain of Alzheimer’s patients.

Matthew Furgerson, a doctoral candidate in the Franklin College of Arts and Sciences’ biochemistry and molecular biology department, used cell culture models to study the role of Hirano bodies in cell death.

“This synergistic cell death is very exciting,” Furgerson said. “Other groups have shown synergy-substitute an interaction between extracellular amyloid beta or amyloid precursor protein with tau, but these new results show that there may be an important interaction that occurs inside the cells.”

The results of this study were published in the September issue of PLoS One. Ruth Furukawa, associate research scientist, and University Professor Marcus Fechheimer are co-authors on the paper. They are both faculty members in Franklin College’s cellular biology department.

Furgerson also found cell death is significantly reduced in cells that contain Hirano bodies compared to cells without Hirano bodies. The protective effect of Hirano bodies was observed in cell cultures in both the presence and absence of tau. The findings reveal that Hirano bodies may have a protective role during the progression of Alzheimer’s disease.

While this research offers no cure for the disease, it does offer some understanding about how the disease operates. The lab has been a leader of Hirano body research for more than a decade due to its development of cell culture and mouse model systems.

Before the development of model systems, the only way to study these abnormal structures was in post-mortem brain tissue. The recently developed Hirano body mouse model is currently being used with an Alzheimer’s model mouse to investigate whether cell culture results can translate to a complex animal.

“I feel privileged to lead a team that might be able to contribute knowledge to help us understand Alzheimer’s disease processes,” Fechheimer said. “Other groups have focused on plaques and tangles, and we don’t know as much about Hirano bodies. Results from the cell culture studies are exciting and reveal the protective role of Hirano bodies. Our ongoing studies with mouse models are essential to defining the role of Hirano bodies in Alzheimer’s disease progression in a whole animal.”