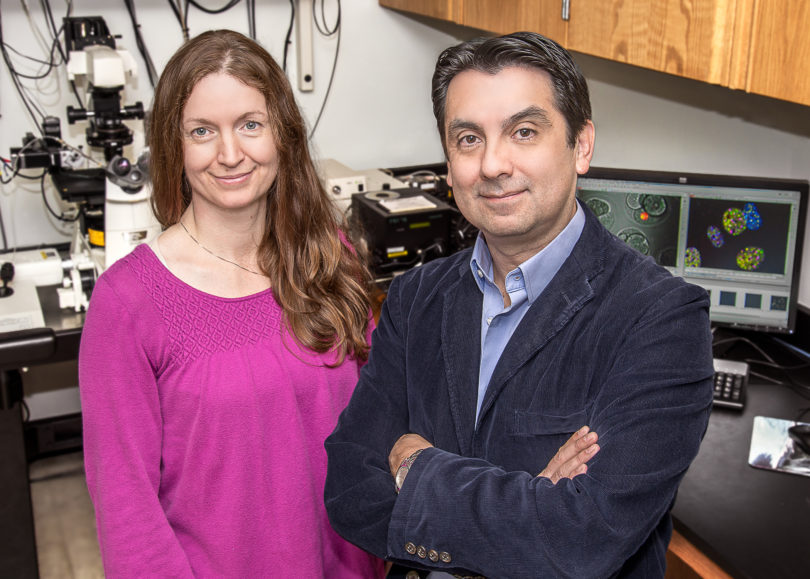 Athens, Ga. – The protein necessary for fertility in both sexes performs distinctly different roles in male and female gametes, according to a groundbreaking study, which included researchers from the University of Georgia College of Veterinary Medicine. Known as BRWD1, the protein controls gene expression in maturing sperm while promoting chromosome condensation and stability in female cells called oocytes, which become eggs.

The research, conducted by faculty at UGA, the Cornell University College of Veterinary Medicine and the Jackson Laboratory, was published in the Journal of Cell Biology.

“These findings will give us important clues toward the goal of understanding the mechanisms involved in early pregnancy loss and infertility,” said study co-author Rabindranath De La Fuente, an associate professor in the college’s department of physiology and pharmacology. “We have known for a while that chromosome stability is crucial to a successful pregnancy.

“The BRWD1 protein is fascinating as it serves a completely different function in both sperm and eggs. In oocytes, we have yet to determine the epigenetic mechanisms that lead to chromosome instability. This study contributes to our understanding of the mechanisms of chromosome condensation in the female germ cell.”

The chromatin structure in both sperm and oocytes changes as each matures. In male mammals, when meiosis is complete, the resulting cells called spermatids undergo rapid structural changes to make them functional. They break free of their cytoplasm, sprout tails and replace most of their histones with proteins called protamines, which further tightens their DNA. In pre-ovulatory oocytes, as the genes shut down, their heterochromatin gathers along the edge of the nucleolus. In their study, the researchers hypothesized that BRWD1 was responsible for orchestrating the postmeiotic changes that occur in both sexes.

They determined that in sperm, when BRWD1 is absent, transcripts from hundreds of genes—all specific to spermatid development—were markedly reduced, suggesting that in males BRWD1 is responsible for regulating gene activity.

By contrast, in oocytes, a lack of BRWD1 results in a surge of bad information via noncoding RNAs, and only three genes showed a dramatic increase in expression. Chromosomes were often abnormally long or fractured, and chromatids did not condense properly or stuck to one another only to stretch or break when they tried to separate. In other words, BRWD1 is necessary for chromosome stability during female meiosis.

“It is remarkable that the same protein, BRWD1, has evolved to perform different functions in the development of sperm and eggs showing that evolutionary processes can be very efficient,” noted John J. Eppig, professor emeritus at the Jackson Laboratory, who collaborated on the project.

The study, published Dec. 29 on “Mouse BRWD1 is critical for spermatid postmeiotic transcription and female meiotic chromosome stability,” is available at http://jcb.rupress.org/content/208/1/53.full. The study and its collaborators were the subject of a JCB “In Focus” article available at http://jcb.rupress.org/content/208/1/3.