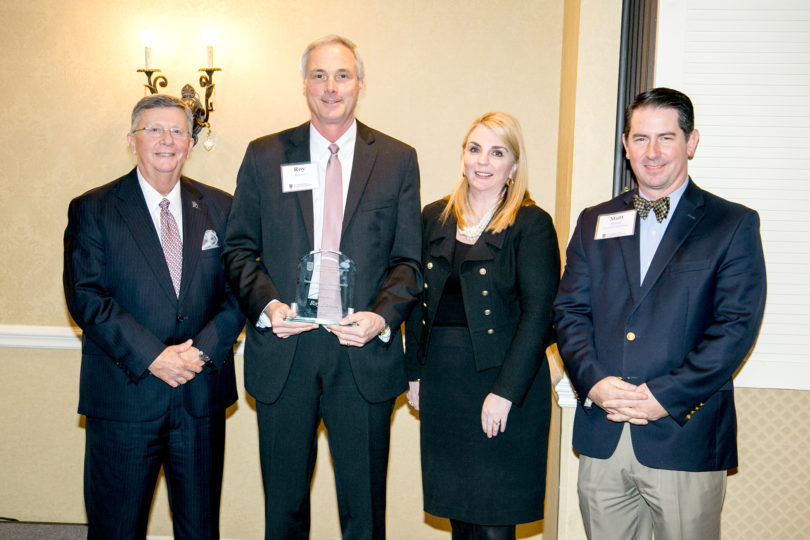 Roy Reeves, a Moultrie businessman who was instrumental in the launch of the first UGA Archway Partnership, was presented with the inaugural award for Innovation in Community Leadership by the J.W. Fanning Institute for Leadership Development, during the institute’s annual conference.

Reeves was selected for his decades of public service in Colquitt County.

“The Innovation in Community Leadership Award recognizes an individual or organization that has taken extraordinary steps to enhance and sustain their community leadership development programming,” said Matt Bishop, director of the Fanning Institute, a unit of UGA Public Service and Outreach. “This year’s winner, Roy Reeves, has been involved in various aspects of community leadership programming in his hometown of Moultrie for more than three decades. His leadership in public education, the faith community, youth development and community engagement has resulted in hundreds of emerging leaders being trained to take on community leadership roles.”

Reeves, who did not know ahead of time that he was the award recipient, said he was honored to be recognized.

“I believe everything rises and falls on leadership,” Reeves said as he accepted the award. “The greatest resources a community has are its volunteers.”

Reeves, who owns Reeves Properties in Moultrie, has chaired the executive committee of the Colquitt County Archway Partnership since it was launched as a pilot program in 2005. Archway, also part of UGA PSO, connects selected Georgia communities with the extensive resources at UGA and other Georgia higher education institutions to address locally identified critical community needs.

Reeves’ volunteer work in the Moultrie community dates back to the 1980s, when he returned to his hometown to join the family business.