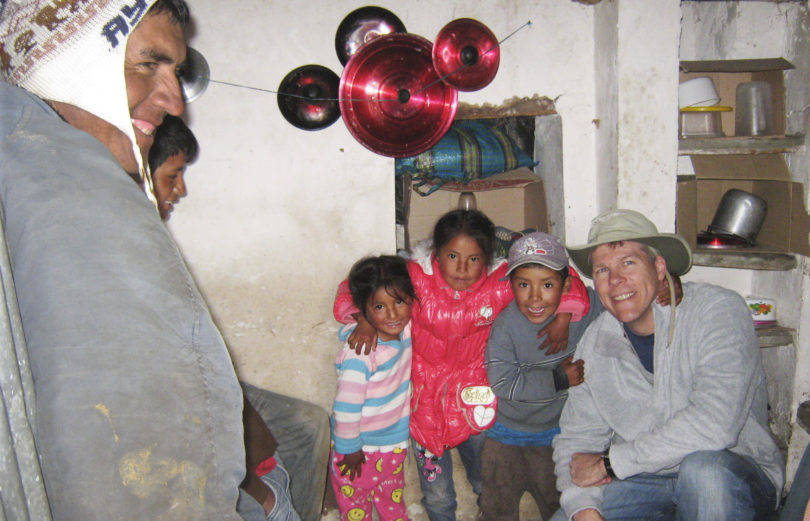 Traveling from Guatemala, Peru and Chile to India, Luke Naeher has spent his career studying an air pollution source that is one of the world’s biggest but least well-known killers-smoke from indoor cookstoves.

An associate professor of environmental health science in the College of Public Health, Naeher has worked extensively in the developing world measuring human exposure to cookstove air pollution and understanding the related health effects.

“Wood smoke is similar in many ways to tobacco smoke,” Naeher said. “We think of it as benign in comparison, but it still has many of the same carcinogenic products of biomass combustion-minus the addictive properties.”

According to Naeher, indoor air pollution levels from traditional cooking practices are so high that blackened walls and stalactites of soot are commonplace near traditional cookfires.

“We very rarely see household air pollution levels like this in the developed world since we cook primarily with gas and electric stoves. Indeed, switching to these fuel sources would be the solution in the developing world, but it’s not so easy for a number of reasons,” he said.

One major obstacle is cultural, said Naeher. The types of stoves and fuels favored by communities vary dramatically by country. The stove must not only be economical and easy to use, but also meet a family’s cooking needs to convince them to shift from a way of cooking that their families and communities have used for generations.

Attempting to tackle this challenge, Naeher and his team of undergraduate and graduate researchers have paired with interdisciplinary groups looking to identify and evaluate improved cookstoves capable of reducing exposures and leading to improved health.

In Kenya, Naeher is collaborating on a Centers for Disease Control and Prevention and World Health Organization-led effort to identify the most efficient and clean-burning cookstoves on the market, testing if air pollution can be reduced by their use in rural Kenyan homes.

Naeher and his team, including colleagues from the Rollins School of Public Health at Emory University and Universidad Peruana Cayetano in Heredia, Lima, Peru, also are finishing a project in the Northern Andes community of Ayachuco, Peru. Its aim is to quantify how low birth-weight in children relates to their mothers’ exposure to cookstove-related air pollution during pregnancy.

Naeher began studying the impact of cookstoves on the indoor air quality of indigenous homes as a master’s student in environmental health science at the Harvard School of Public Health, through funding from the WHO in Guatemala.

The Kenyan component of Naeher’s cookstove intervention work continues through an Inter-Professional Agreement he maintains with the CDC, while some of his cookstove-related work in Peru is funded by the Fogarty International Center at the National Institutes of Health.