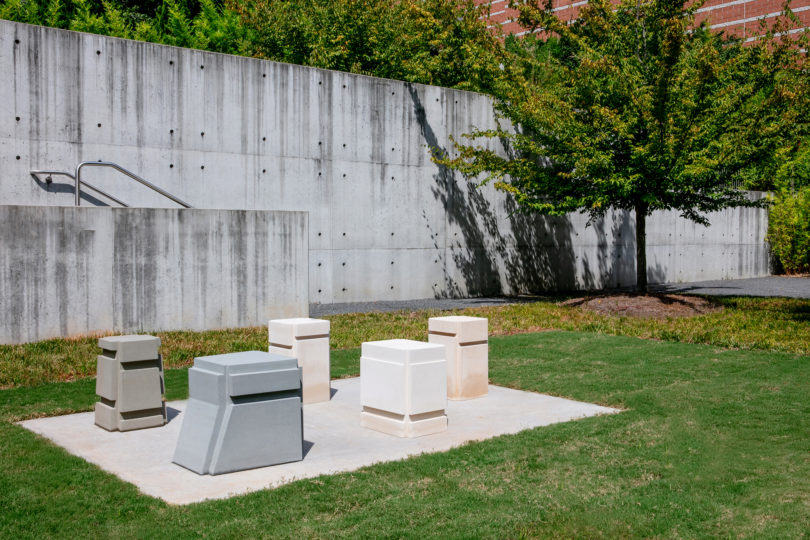 Rachel Whiteread’s sculpture gives shape to the nothingness of space. Her work is on display in the Jane and Harry Willson Sculpture Garden at the Georgia Museum of Art at the University of Georgia through March 7. The exhibition “Rachel Whiteread” presents a series of five cast-stone sculptures reinterpreting her earlier resin castings of the space beneath chairs.

The works are arranged in a table setting, reinforcing their domestic nature and origins. Variations in the stone type and surface textures of each piece make use of changes in outdoor lighting over the course of a day. All loans are courtesy of Gagosian. 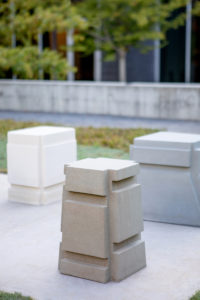 Whiteread uses the negative space in and around domestic objects, the air becomes the subject of her study. She captures the essence of familiar spaces and “mummifies the air,” preserving the history of the space. Her work investigates the relationship between place and memory. It redefines the role of sculptural casting in artistic expression. For Whiteread, the process of creating a sculpture is as important as the work itself.

The museum has also selected works on paper by Whiteread and related artists from its collections that will be on display inside, in the galleries on the second floor. These works, many of which address space and voids, provide additional context to Whiteread’s sculptural installation.

Whiteread was born in London in 1963. She studied painting at Brighton Polytechnic from 1982 to 1985 and sculpture at the Slade School of Fine Art from 1985 to 1987. In 1993, she was the first woman to win the Turner Prize. She represented the British Pavilion at the 47th Venice Biennale in 1997, and in 2000 she completed a commission for the Holocaust Memorial at the Judenplatz in Vienna, Austria. From 2017 to 2018 a retrospective exhibition of her work was on view at the Tate Britain in London and the National Gallery of Art in Washington, D.C.

Related events at the museum include a Family Day on March 7 from 10 a.m. to noon that is free and open to the public.

The sculpture garden is devoted to the display of works by woman sculptors and hosts temporary exhibitions as well as objects from the permanent collection.